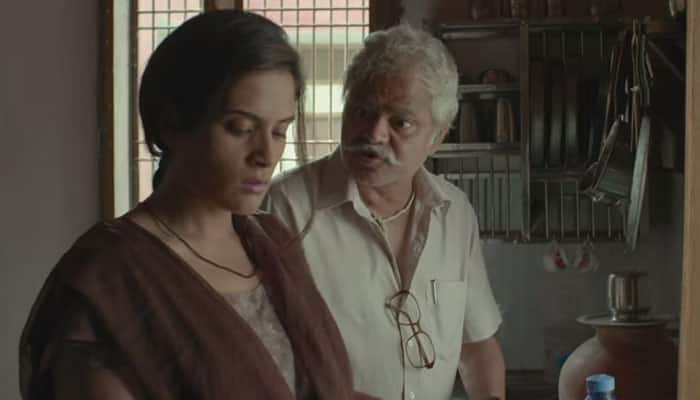 Masaan, first-time director Neeraj Ghaywan's dark yet bewitching ode to Varanasi, is an outstanding piece of cinema that deserves every bit of the hype generated by its Cannes success.

The film is remarkable as much for its sense of sustained cultural fidelity as for its finely etched, believable characters that grow quietly but surely on the audience.

A bulk of the action if it could be called that, given that much of the drama in Masaan is passive and internal unfolds in and around a cremation ground.

While the funeral pyres provide an immersive backdrop, they also serve to denote the crackling bonfires in the troubled hearts of the three principal characters. Life, death, love, guilt, grief, morality, rebellion, salvation, freedom Masaan is filled with an array of emotional touchpoints that propel its many narratives forward.

The film is steeped in the ethos of Varanasi without taking recourse to any of the visual cliches associated with the holy city religious rituals, ganja-smoking sadhus, meditating yogis or tonsured mourners.

What Masaan offers instead is a trio of tangible and interesting individuals caught in moral cleft-sticks as they grapple with the unsettling changes sweeping through the small town.

Their dilemmas are either of their own making or are brought on by destiny, but each of them is far too spirited to be cowed by externally imposed strictures.

Devi Pathak (Richa Chadha), who we see right at the outset of Masaan, rushing to a secret rendezvous with a boy she has befriended at the computer coaching centre where she works.

The escapade ends in a fiasco: the law barges in on the young lovers and the boy, a first year student of a local college, panics and attempts suicide.

The corrupt officer in charge captures Devi in a state of deshabille on his smartphone and threatens to post the MMS on YouTube and slap an abetment to suicide case unless he is bribed.

For Devi's father, Vidyadhar Pathak (Sanjay Mishra), former Sanskrit scholar who now makes a living on one of the many ghats by selling stuff for post-cremation rituals, raising 300,000 rupees to hush up the case is no easy task.

It forces the old man to resort to desperate measures that put the well-being of Jhonta (Nikhil Sahni), the orphan boy who works for him, in serious jeopardy.

Masaan cuts away frequently from Devi's story to follow Deepak Kumar (Vicky Kaushal), a member of the Dom family that runs one of the burning ghats.

For the young man, a final year civil engineering student who dreams of a government job, education is a means of escape from his lot in life.

Deepak falls in love with an upper caste girl, Shaalu Gupta (Shweta Tripathi), who reciprocates his ardour. The relationship is clearly up against huge societal obstacles but the duo are determined to fight their way through.

Masaan is served brilliantly by a soundscape livened up by Indian Ocean's compositions and screenwriter Varun Grover's lyrics, which draw inspiration from poetry rooted in the soil.

Director of photography Avinash Arun illuminates most of his frames solely with available light, a creative choice that enhances the film's realistic feel.

The quality of the acting, too, is of the highest order, with all the four principal members of the cast Sanjay Mishra, Richa Chadha, Vicky Kaushal and Shweta Tripathi leaving their imprint on the film with perfectly modulated and sustained underplaying. Masaan is a splendid little gem, an absolute must watch.