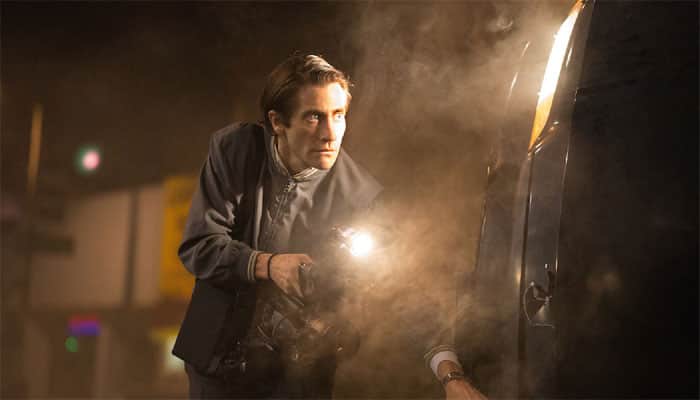 Packed with maniac energy, debutant director Dan Gillroy's "Nightcrawler" is an action packed crime drama that works as a social as well as a psychological commentary. It reflects on where we are going as a society.

It is the story of a desperate man, Louis Bloom (Jake Gyllenhaal), trying to manipulate his way to respectability and success in the world of crime journalism.

Set in the nocturnal underbelly of contemporary Los Angeles. Like an owl, Louis scavenges during the night. The film opens with him ruthlessly mugging a security guard, while stealing metal scrap. He is a sociopath, who has the spunk and desire to achieve something greater.

During one of his midnight missions, while he is driving around, he witnesses an accident on the highway. A closer look leads him to a group of freelance camera crew filming the crash. When he crosses paths with Joe (Bill Paxton), he realizes that he too could try his hand in filming newsworthy events.

So after trading some stolen items at a pawn shop for a video camera, and studying about the media over the internet, he begins work.

He makes his way to any crime scene, fire or accident and tries to capture the incident close and up front, hoping that the footage of the untoward happening will fetch him some remuneration.

The blunders he makes when he first tries to break into the profession, provide some light moments a" the technical glitches and breaches of protocol with annoyed police officers and the firefighters. But Louis is frighteningly smart and a quick learner.

In no time he manages to catch the attention of a local news producer Nina Romina (Rene Russo), whose on-air glory days at KWLA are far behind her. She is his professional soul mate, who is enamored with his images. She further briefs him on the type of images she is seeking to increase her television ratings.

Soon, Louis ups the stakes by enlisting a right-hand man Rick (Riz Ahmed) to help him navigate across town. Rick is so desperate for work that he puts up with Lou's sleazy and cheap ways. Eventually, the two men become a formidable team.

Gyllenhaal delivers an extremely powerful and blatant performance as the unscrupulous Louis who slowly and steadily works his way up and gets sucked into the mainstream.

Rene Russo, who is also the director's wife, has a significant role as Nina. Bill Praxton is wasted as Joe.

The screenplay, written by the director, is a masterpiece. It is crisp, creepy and terrifying. Unlike earlier films on media like "Ace In the Hole" or "Network", this one is disturbing.

With sound production values, the cinematography by Robert Elswit is excellent. His hand-held digital and film footage merge seamlessly into the narration. Overall, this film is technically thorough.

A must watch film as it keeps you engrossed throughout and your eyes riveted to the screen.