'Rang Rasiya' review: Painting a not so pretty picture 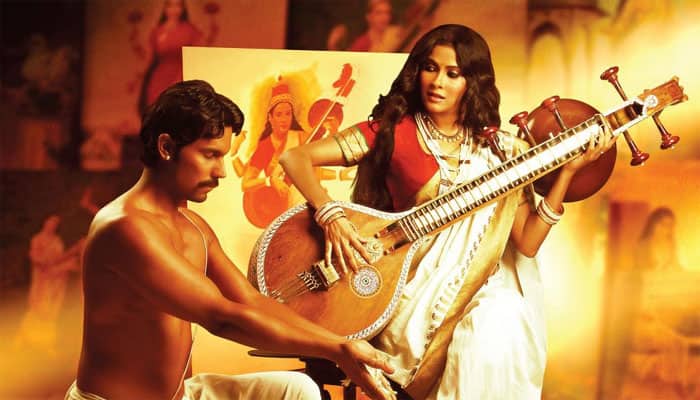 For artists in India, Raja Ravi Varma is an icon. He brought together the western style and Indian subjects, and made God available to each and every household in the country. He is a symbol who fought the society for the freedom of expression – something that we struggle with even after a century has passed.

Filmmaker Ketan Mehta, the genius behind classics such as 'Sardar' and 'Mirch Masala', decided to paint a picture of the man himself (based on Ranjit Desai's novel), his life story and his struggle through the movie 'Rang Rasiya'. The feature was waiting on the shelves for half a decade, to see the light of day only now because of censorship.

He attempts to portray an artist at the pinnacle of his talent and the fight to bring God to each home. He further tries to weave in a love story within this story. That is where the film fails.
Randeep Hooda plays Raja Ravi Varma, who finds his muse in Sugandha (Nandana Sen), and paints her as different Hindu Goddesses in his various paintings. He then finds opposition from Hindu higher caste group which questions his subjects and why he chooses to let 'normal' people have access to Gods, who are supposed to reside only in temples.

The life of the painter is an inspiration even today, and the subject is as relevant today as it was a 100 years back. But, the director has not been able to weave a seamless entity of the persona of Raja Ravi Varma. Somehow, the story has not been told well, despite a short run-time (a little over two hours) it seems to drag on most points. The biggest snag in the movie is the unnecessary sexuality that has been introduced. The chemistry between Nandana and Randeep is forced and at least Hooda looks quite uncomfortable in the scenes. While the actress looks ethereal and a perfect muse for a painter, she is not a great actress and fails to invoke the expressions required of her character.

Randeep is suitable as the lead, but flits between good acting and expressionless performance quite often. After watching him in 'Highway' the expectations from a serious subject like this were high, he fails to meet them. Supporting characters however have done well. Paresh Rawal has as usual perfectly portrayed a greedy businessman who has little interest in artistic temperament.

The biggest problem is the linear characterisation of Raja Ravi Varma, there are parts where it gets promising and you expect more layers of the artist to shine through. But, the spark fails to form anything spectaculor.

Couple of high points of the movie – Niharika Khan, the costume designer has done a beautiful job. Whether it was the sarees of Sugandha or the Royal garb of the stately kings, she has done a nuanced job, paying attention to detail for the major characters of the film. The sets are beautifully done, quite befitting the artistic scale of the project. Some of the scenes of the movie have picturesque cinematography, but it fails to keep up through the length of the movie.

The background score is average but a particular song caught my attention. While the painter is travelling through the country, 'Anhad Naad' performed by Kailash Kher and Anwar Khan keep you in tune. It is a beautiful rendered folk number which combined with visuals of 19th century India has well portrayed the soul of the country.

Despite all its flaws, it is relevant even today. It has a message that humanity struggles to accept a lot of things, and the more open-minded we are – the more towards greatness we move as a race. But the message gets lost in the overly forced romance. Watch it to learn the story of a great artist, who is historically significant to the rise of Indian art. But there is little else to offer.

Matthew McConaughey in talks for 'Free State of Jones'