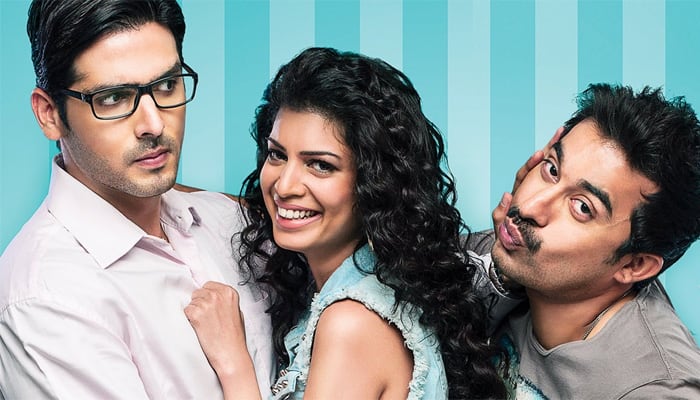 You might think there is nothing funny about a working-class Delhite counting pennies and scrounging on the butter on his bread(literally) suddenly coming into underworld money in his bank account.

Think again! Humour often hides in the unlikeliest of nooks and the crummiest of corners. 'Sharaafat ....' is a hard word to describe and an even harder concept to follow. Walking the straight path at a time when corruption is a way of life is like trying to balance an uncut pumpkin on your head while crossing the road at the traffic signal when there is a green light.

Meet the nerdy Prithvi Khurana(Zayed Khan) and his sloppy room mate Sam(Rannvijay). Theirs would have been the routine life of two unremarkable never-beens if it wasn't for the windfall in Prithvi's ATM account.

The sequence in the ATM booth where Prithvi suddenly discovers he is millionaire is shot with a gusto that underlines the disguised materialism of the Indian working class.

The satirical screenplay(Rajesh Chawla, Gurmmeet Singh) has plenty of twists and turns that keep us engaged as we are taken skipping hopping and gamboling into the second-half. The narrative,though leisurely in place never allows itself to be bogged down by self-importance.

There is a casual air to the proceedings even as the two protagonists get progressively deeper into the self-created mess.Delhi the city that hosted the humorous ode to hectic horniness ‘Delhi Belly’, gets a bit of a makeover in director Gurmmeet Singh's film. ‘Sharafat Gayi Tel Lene’ conveys an equal measure of Capital chaos and comic capitalism without the vulgarity of ‘Delhi Belly’.

Gurmmeet Singh had earlier courted quirkiness in ‘What The Fish’ where the concept of Dimple Kapadia's well-appointed residence being taken over by various eccentric characters generated some humour. In ‘Sharafat Gayi Tel Lene’ the voice of Dawood (yes, the voice plays a pivotal part) plays the same part as the residence in ‘What The Fish’.

Zayed Khan as the nerdy Delhite keeps the performance bridled and likeable. He deserves better. Rannvijay as the Insignificant Other is delightfully droll. ‘Sharaafat...’ as a concept of proper conduct never seemed more like sharaarat, as the con game is played through the streets of Delhi.

The film takes on the theme of greed and covetousness and turns it into a pleasant satire. A saucy comedy about a commoner's brush with the "D" gang, this is an original smile-inducing romp into the realm of comedy where errors define the mood, and the characters are not as interesting as the situations that the script tries to create for them.

This is certainly funnier film than any other comedy this week.