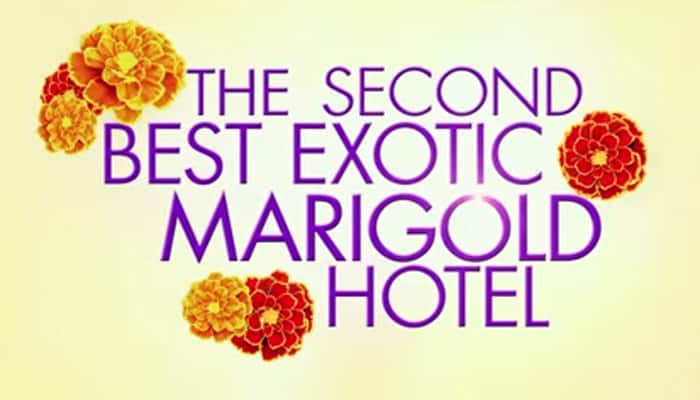 This typical indie masala film is a sequel to the 2012 released, ‘The Best Exotic Marigold Hotel’. It lacks the novelty factor and the sheen which was apparent in its first edition.

The narration takes off a couple of years after the long-term British residents have settled at ‘The Best Exotic Marigold Hotel’ in Jaipur. The hotel is packed to capacity and manager Sunil Inderjit Kapoor aka Sonny (Dev Patel) and his co-manager Muriel Donnelly (Maggie Smith) are now toying with an expansion plan for "The Second Best Exotic Marigold Hotel". This forms the crux of this film.

The sequel opens with Sonny and Muriel on a road trip to California in the hope of finding an investor to help them buy the property they are looking for. After the inconclusive meeting with the retirement company in the US, who they hoped would finance their dreams, the duo are back in Jaipur.

Life continues as routine with Sonny taking roll calls of his guests every morning, in case they leave unexpectedly, pun intended.

And while he manages his hotel, he is also bogged down with his impending marriage to Sunaina (Tina Desai) and his uncertain future. His frustrations escalate when Kushal (Shazad Latif), Sunaina's brother's friend, turns up in their lives.

The rest of the coterie at the hotel too are embroiled with issues of their own, basically related to matters of the heart. The end culminates as a geriatric romance saga punctuated with rough, dry and acidic humour, that generates from metaphor packed dialogues.

Adapted from Deborah Moggach's 2004 novel, ‘These Foolish Things’, the script written by Ol Parker is chaptered in three parts; The Sagaai - The Engagement party; The Sangeet - The Family party; and the Shaadi - The Wedding.

With several sub-plots, numerous characters and no dramatic sequences, the pace of the narration is fluid, sluggish and meandering.

The film is worth watching for the fine performances by the geriatric cast. Maggie Smith as Muriel who keeps Sonny grounded, is endearing. It is a delight to watch her dish out caustic one-liners.

Judi Dench as Evelyn Greenslade, who sources textile for an overseas company now appointed as its official buyer, has a bounce in her step after a successful negotiation. While she is professionally secure, her relationship with Douglas (Bill Nighy), the half-baked tour guide in Jaipur, is on a rocky terrain. It is touching to see how he proposes to her.

Equally interesting is to watch the tracks played by; Celia Imrie as the romance starved Madge, who is wooing two eligible suitors and Richard Gere who plays Guy Chambers, an incognito hotel inspector and a novelist who finds his muse in Lillete Dubey, Sonny's widowed mother.

Dev Patel slips into Sonny's shoes with fine precision as the over-confident and irritatingly talkative entrepreneur. He pairs with Tina Desai in equal measure. Together, their chemistry is blatant and appealing. Shazad Latif as the bone of their contention has his screen moments and he shines.

A few Bollywood songs like ‘Yeh ishq haaye’ from ‘Jab We Met’, ‘Balma’ from ‘Khiladi 786’ and ‘Aila re aila’ are integrated into the script. And the entire cast seemed to have a blast shaking their legs to ‘Jhoom Barabar Jhoom’.

With good production quality, the film efficiently captures Jaipur through Ben Smithard's lens, but then the images are not alluring enough to make you want to visit Jaipur.

Joseph Gordon-Levitt to produce and star in 'Fraggle Rock'