'Welcome 2 Karachi' review: Desi version of the Dumb and the Dumber 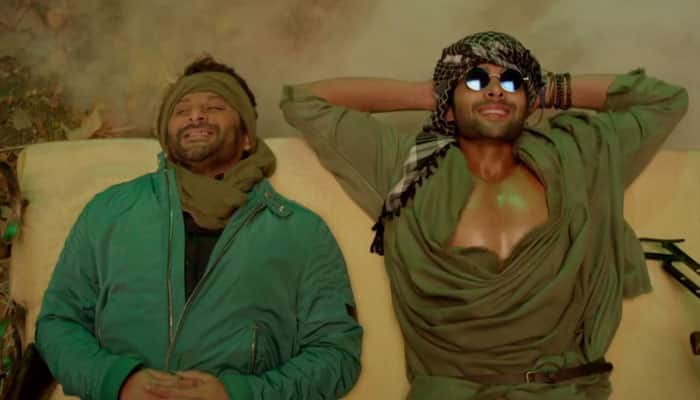 Two idiots, (thank god they were not three!), Shammi Thakur (Arshad Warsi) and Kedar Patel (Jackky Bhagnani) who are inseparable buddies, are always dreaming of something bigger and better in life. While Shammi is a naval officer, who has been court-martialled, but considers himself a genius and street smart; Kedar the super genius, is a simple Gujarati boy whose only aim in life is to go to the US and make money.

Since Kedar's visa is twice rejected and he knows going to the US is a distant dream, Shammi devises a plan where they can go to the US in a boat, hence dispensing with the need of a visa.

Misinterpreting Kedar's father Mithesh Patel's instructions of picking up the marriage party who has booked the boat, the duo zip off themselves with the women dancers in tow. Mid-sea amidst a thunderous storm, the boat capsizes.

Unconscious, the two wash-up onshore the next morning. A bomb blast on the beach lands the duo in hospital, where they find each other, after the initial shock of discovering where they are. No prizes for guessing this is Karachi, as that is what the title of the film suggests. This marks the beginning of 'welcome to confusion'.

In a case of mistaken identity, they are kidnapped. What follows are a series of trials and tribulations, for both; the duo and the audience, albeit, swathed in humour. They find themselves caught in a quagmire. One troublesome situation leads to another as they encounter terrorists, Taliban, US government officials, et al. They finally cross the border or so they think. But safety still eludes them.

The film is supposed to be replete with humour as it is pitched as an action comedy. Action, there is plenty, but the humour quotient is weak. Some good punches, witty one-liners, but mostly cliched mannerisms of a Gujju boy who hams his way through, is all what the film offers.

Arshad Warsi walks through the film, yet, effortlessly performs some scenes with his characteristic humour and panache. He is endearing. There are sparks of his inimitable style and comic timing, but those are few and far between.

Jackky Bhagnani, makes a sincere effort, but disappoints yet again. Only his energy on screen is laudable. Lauren Gottlieb, hardly has any screen time, but has a strong enough screen presence and looks the character Shazia Ansari, the ISI agent, she is portraying.

Ayub Khosa as the Taliban leader is convincing and deserves a mention.

The music is loud and obtrusive, but the number "Chal bhaag nahin toh" is sufficiently racy and situational.

Overall, the production values of the film are of good quality. The setting and locales can safely pass off as Pakistan. Kudos to the art director.

Director Ashish R. Mohan seems to have a flair for action, but could have concentrated on quality humour as well. The dialogues, though witty at times seem like a feeble effort to make the audience laugh.

"Welcome 2 Karachi" is a poor desi version of the "Dumb and the Dumber".

Kangana Ranaut, Shahid Kapoor to star in Vishal Bhardwaj's next?