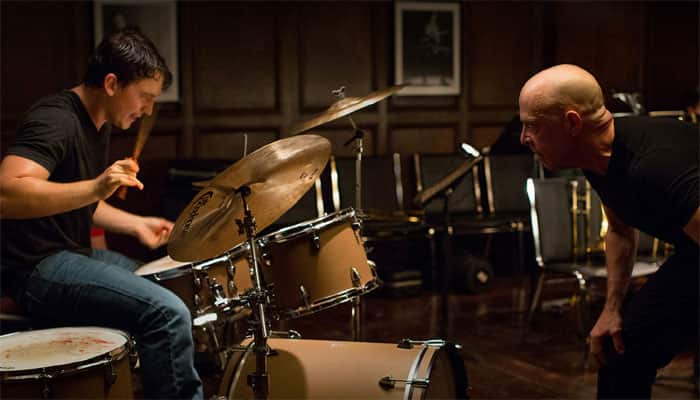 "Whiplash" -- this title used in a tale to reveal that practice makes one perfect -- is brutally metaphorical. It literally whiplashes you into accepting that perfection is a quality that can be achieved only by sheer hard work.

The story deals with a student-teacher relationship, where the crux of the narration is the conflict between the perfectionist teacher's ways of grooming his student and the student's feverish aspiration to be recognised for his talent.

The narration starts off with the sounds of the drums and then very theatrically reveals Andrew Neyman, a young talented and dedicated jazz drummer pounding his way, till he realises that he is being noticed by Terence Fletcher, the foreboding music teacher at the highly prestigious Shaffer Conservatory of Music who has a sharp tongue for the wrong note.

Initially, Neyman panics and fumbles. But then being an eager student, he soon finds himself invited to join the master's exclusive band. Pleased with his performance, Fletcher puts Neyman at ease by telling him: "Just have fun!"

Neyman literally loosens up only to find himself being ruthlessly brought down to earth.

Soon, Fletcher raises the bar of his obsession for perfection and Neyman finds himself losing ground. Not ready to give up easily, he mercilessly toils to earn his position in the band.

What makes writer-director Damien Chazelle's narration palpably acceptable is the on-the-face contrasting characters that are pitched on the two ends of the scale. The script does not digress from the subject.

Even a romance sub-plot is quickly nipped in the bud, owing to Neyman being focused on his goal and this is smartly wrapped up just before the climax. It is Fletcher's brutality and Neyman's earnestness that keeps you hooked till the very end.

Simmons as the hardnosed Fletcher and Miles Teller as Neyman give performances par excellence.

Simmon's performance is supported by hard hitting dialogues that leave a striking impact. When he screeches: "Are you a rusher or a dragger," there is viciousness in his eyes. And you also feel sorry for the man, when he puts his point of view across as to why he is harsh.

One is equally moved when tears roll down his cheeks, when he reveals the death of his student.

Similarly, you feel for Teller as he slips into Neyman's boots with convivial ease.

The audience feels empathy for his character at different moments - pain when he is the forlorn victim, who is bruised and abused, anxious when you see him slide from his over-turned car rushing to the performance venue to make it on time and you cheer for him in the climax, as he defiantly challenges his teacher.

There also are some warm bonding scenes that stand out.

Visually, the film is atmospherically crafted. The tight close-ups of sweat and blood on the musical instruments in golden hued lighting are dramatic and forced. The sound of drum beats along with the rhythmic themes of the stringed instruments as the back-ground score is effective, but they do not elevate the viewing experience.

Overall, "Whiplash" is a ruggedly ruthless and an honest film that's definitely worth a watch.