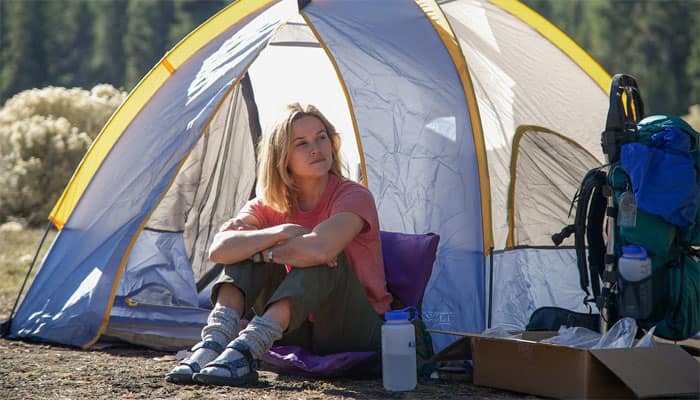 "Wild" is a road film about self-inflicted torture and liberation. It is about setting goals and forging ahead with your resolution. It's also about endurance and how "Problems don't stay as problems, they change to something else".

Scripted by Nick Hornby, based on Cheryl Strayed's memoir - "Wild: From Lost to Found on the Pacific Crest Trail", it details Strayed's 1,100-mile hike from the Mojave Desert to the Oregon-Washington border and tells the story of the personal struggles that compelled her to take the hike.

The film starts off in a dramatic manner. We hear Strayed (Witherspoon) panting, pained and exhausted, seated at the edge of the cliff with her backpack stacked next to her, nursing her badly wounded feet.

She notices her dismembered toe-nail and yanks it off causing her to accidentally drop one of her shoes in the valley. Frustrated about the journey and loss of her shoe, she hurls abuses and flings the other shoe in the valley and continues her journey.

This sets the mood and tone of Vallee's "Wild" and sums up the message: When the going gets tough, the tough get going.

The film is layered. Narrated in a non-linear fashion, it encapsulates Strayed's physical as well as mental journey after the death of her mother, her failed marriage and her wild ways of living.

With suspense and style, warmth and humour, the film sparkles. Apart from powerfully capturing the terrors and pleasures of the trip, it unveils Strayed's catharsis and grief especially in terms of her relationship with her husband, mother and brother.

Director Valle, who had earlier delivered Oscar-winning film "The Dallas Buyer's Club" has intelligently crafted "Wild". He has a distinct style that is compelling and it works.

"Wild" may not be an excellent piece of art but with the right balance of melancholic and cheerful moments along with effective performances, he grips you and keeps you hooked.

Packed with raw wounds and emotions, Witherspoon breathes life into the emotionally down and weather-beaten Strayed. You can sense her fear and feel her pain and pleasures.

But it is Dern, as the warm and matronly Bobbi Grey, Strayed's mother who steals the show with her strong emotional act.

Thomas Sadoski as Strayed's husband Paul is functional. Probably, it is his limited screen time and underwritten character graph that does not work for him.

The other co-stars who have their moments of glory are Kevin Rankin as fellow wanderer Greg and Mo Mcrae as Jimmy Carter the ridiculously funny reporter from Hobo Times. They definitely leave an impact even in limited screen time.

Shot on a digital camera, cinematographer Yves Belanger's frames from unusual angles are a treat to watch. But it is the sound team that has done a dazzling job. They have captured nature in all its glory. The sound of the crickets, desert breeze, the storm, the rain and the echo alternating with the pin-drop silence is all captured brilliantly.

Though slow and meandering, "Wild" will appeal to cinephiles.

Public demand brings back DDLJ to Maratha Mandir for one extra week!