Performing in India after 18 years, world famous music composer and instrumentalist Yanni enthralled audience at an event here which was telecast live in 156 countries. 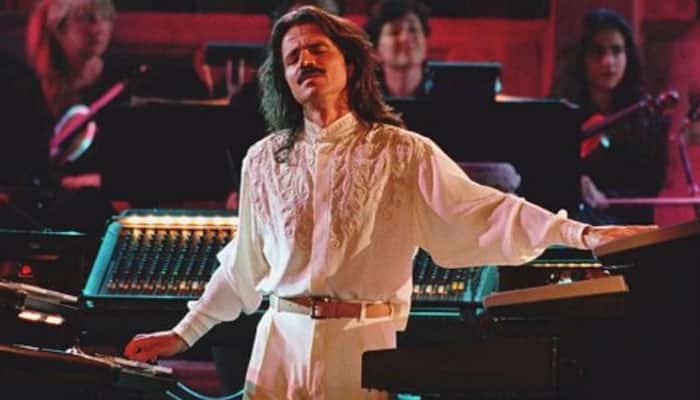 Vadodara: Performing in India after 18 years, world famous music composer and instrumentalist Yanni enthralled audience at an event here which was telecast live in 156 countries.

He and his team of musicians left 9,000-Strong audience captivated at a concert in the majestic Lakshmi Palace last night. The event was organised as part of a four-day Vadodara International Art and Cultural Festival (Vadfest) 2015 that began yesterday.

The renowned Greek musician greeted the people by saying "Hello India, hello Vadodara and kem cho" (how are you? in Gujarati), drawing loud applause from the gathering, which consisted of fans from across India and nearly 20 countries.

"The palace is absolutely gorgeous. We are here only for few days but felt so comfortable. We got so much love, respect, warmth and hospitality that we felt we are part of your family...That is why I love coming to India," said the 60-year-old pianist, keyboardist, composer and music producer.

He played about a dozen numbers with a team of talented musicians from diverse backgrounds. The concert lasted for more than two hours, spanning a mix of musical styles adapted to a flamboyant orchestra comprising brass, strings and drums. Most numbers were fast-paced and energetic.

Yanni was an absolute rock star - conducting, gesturing, hitting every one of his eight keyboards in tandem, running across the stage. Performing to a packed audience in grand style, he played all his classics from 'Felita' to 'Nightingale'.

This was a huge boost to the Gujarat Goverment's efforts to promote Vadodara, through the festival, as a global hub for cultural events and tourism, he said.

The musical messiah, whose real name is Yiannis Chryssomallis, had last performed in India at the historic Taj Mahal in March 1997.

Watch: How Varun Dhawan sweats it out in 'Jee Karda' making!