Lava within Earth's mantle still as hot as it was 2.5 billion years ago!

A mantle plume has been discovered – an upwelling of hot material from deep inside the Earth towards the surface – that still seems to be bubbling away even after 2.5 billion years. 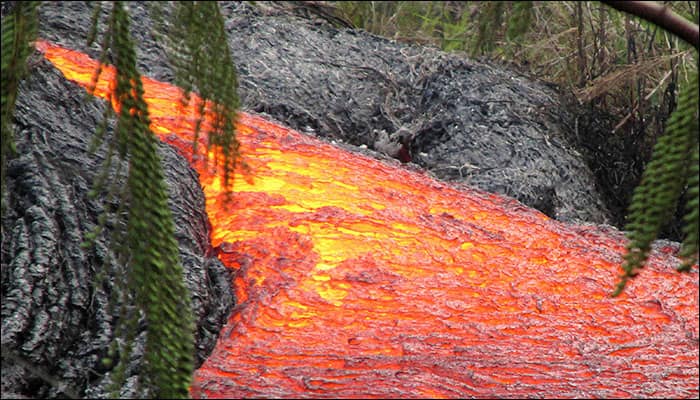 New Delhi: The world is home to approximately 1500 potentially active volcanoes, aside from the continuous belt of volcanoes on the ocean floor.

Over the years, the world has been witness to countless volcanic eruptions, some that have even destroyed whole cities. But, who knew that the hottest lava was not in any volcano, but inside Earth?

Scientists have found lava in deep portions of Earth's mantle that might be as hot as it was more than 2.5 billion years ago.

The study, published in the latest issue of Nature Geoscience, was led by Esteban Gazel, an assistant professor with Virginia Tech's Department of Geosciences, and his doctoral student Jarek Trela of Deer Park, Illinois.

The study brings new, unprecedented evidence on the thermal evolution of the deep Earth during the past 2.5 billion years, Gazel said.

The Earth's mantle has been cooling down for billions of years. But, a mantle plume has been discovered – an upwelling of hot material from deep inside the Earth towards the surface – that still seems to be bubbling away even after 2.5 billion years.

As per the International Business Times (IB Times) UK, the Galapagos plume is thought to originate at the boundary of the Earth's core and the mantle. Extremely hot material rises up from this boundary all the way to the surface, where it erupts in the form of magma through volcanoes. Sometimes the rising material mixes with the surrounding mantle so it cools down, but sometimes it remains relatively untouched as it rises up.

This can result in eruptions at the surface that are up to about 1,600C – about 400C hotter than the ordinary mantle today.

The last time this happened at the Galapagos plume was about 89 million years ago, creating land that has since drifted to the coast of Costa Rica. Although 89 million years ago might sound like a long time, in geological terms it is just the blink of an eye, study author Esteban Gazel of Virginia Tech told IBTimes UK.

"90 million years in geological history is nothing – this is like it happened a couple of minutes ago," said Gazel. "So potentially the temperatures of the core-mantle-boundary are still the same. So there's a chance that we could get lava at that temperature."

The Galapagos islands, Hawaii and Yellowstone in the US are examples of where this extremely hot mantle is rising all the way from the core-mantle boundary, Gazel said.

"The temperatures are generally not as high in these areas as they were historically because the volume of material coming up is way less. But I would argue that in Hawaii the lavas really, really hot – 200C hotter than normal upper mantle. To explain that, it needs to be coming from the core-mantle boundary."

"Our planet is very complicated. What we have here is a very little glimpse into history of the planet and processes that govern the inner Earth. But there is still so much to understand," the IB Times UK reported.