Newly-developed compound will be able to break down plastic waste!

Although amide bonds can give great strength to plastics, when it comes to their recycling at a later point, the difficultly of breaking these bonds usually prevents recovery of useful products. 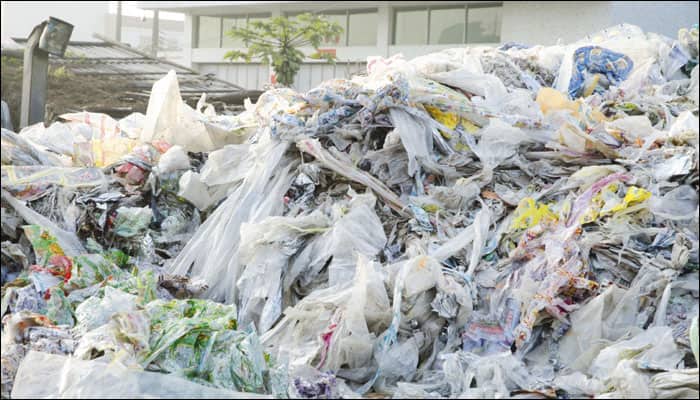 New Delhi: Plastic waste is a menace that is the result of industrialization and to an extent, human activities, without realizing that it ends up affecting our health as well.

Plastic is considered inexpensive and durable, which is why it is most commonly used for packaging.

However, due to its slow degradation process, plastics can severely affect living organisms, especially marine life, through entanglement, direct ingestion of plastic waste, or through exposure to chemicals within plastics that cause interruptions in biological functions.

For humans, plastics can cause disruption of the thyroid hormone axis or hormone levels.

Because of this, environmentalists across the world have been promoting and encouraging everyone to do away with plastic use.

In a step towards this endeavour, scientists have developed a new compound that can effectively break down the toughest of plastic wastes under mild conditions.

Naturally occurring molecules as well as man-made pharmaceuticals and plastics are strung together by strong amide bonds.

Although amide bonds can give great strength to plastics, when it comes to their recycling at a later point, the difficultly of breaking these bonds usually prevents recovery of useful products.

Researchers from Nagoya University in Japan developed a series of organometallic ruthenium catalysts to break down even the toughest amide bonds effectively under mild conditions.

"Our previous catalysts could hydrogenate most amide bonds, but the reactions needed a long time at high temperature and high pressure. This new ruthenium catalyst can hydrogenate difficult substrates under much milder conditions," said Takashi Miura of Nagoya University.

Catalysts are widely used in chemistry to help speed up reactions, but breaking the kinds of amide bonds in plastics, such as nylon, and other materials requires harsh conditions and large amounts of energy, researchers said.

Hydrogenation is the key step leading to the breakdown of amide bonds. The catalyst features a ruthenium atom supported in an organic framework.

This ruthenium atom can adsorb hydrogen and deliver it to the amide bond to initiate the breakdown, researchers said.

The team probed the position of hydrogen on the catalyst in the reaction pathway and modified the shape of the supporting framework.

By making sure that the hydrogen molecule was the best possible position for interaction with amide bonds, the team achieved much more effective hydrogenation.

"The changes we made to the catalyst allowed some tricky amide bonds to be selectively cleaved for the first time," said Susumu Saito from Nagoya University.

"This catalyst has great potential for making designer peptides for pharmaceutics and could also be used to recover materials from waste plastics to help realise an anthropogenic chemical carbon cycle," Saito said.

The study was published in the journal Scientific Reports.