This footage of skeletal sun bears begging visitors for food at Bandung zoo is distressing – Watch!

Visitors were filmed throwing candy and crackers into the enclosure in an attempt to feed the starving animals. 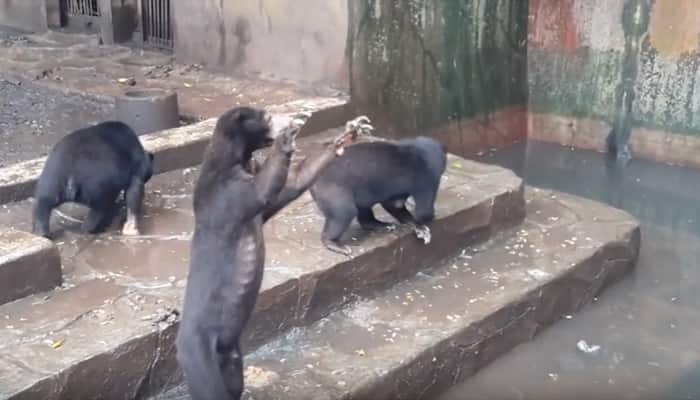 New Delhi: Begging is not just meant for humans, even animals do. But the following footage of the sun bears begging for food will make your heart cringe.

In the disturbing video, some sun bears can be seen begging visitors to the Bandung zoo for food. The zoo, situated on the island of Java, came under heavy criticism after the heart-rending video went viral. Watch the video below!

Visitors were filmed throwing candy and crackers into the enclosure in an attempt to feed the starving animals. The video not only gained public's attention, but invited an investigation from a wildlife trade monitoring group, Scorpion.

“When my team visited the zoo last week there was no grass or live trees on the floor of their cage, Gunung Gea, the director of Scorpion, told Daily Mail Australia.

“We saw a sun bear eating its own dung but when we contacted the zoo's officers they told us the bear was medicated and we weren't allowed to see it.”

Animal activist Tori Hollingsworth, who launched an online petition for the zoo to be shut down after seeing the video, said: “The bears are extremely thin and very hungry. Appalled visitors give them junk food to try and keep them alive.

“The video shows how the sun bears immediately go after small pieces of food that are tossed in their direction. They stand on their two feet and beg for more in a truly heartbreaking moment.

The petition demanding the zoo to be shut has earned 12,000 signatures so far, says reports.