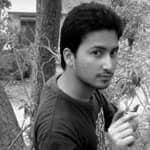 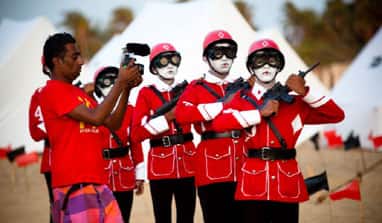 When the ‘cinematically high’ Tasher Desh took the audience on a trip at the 7th Rome International Film Festival on Sunday, Mr. Q (Quashik Mukherjee), with a smirk on his face, added another feather to his controversial career. Rabindranath Tagore would have surely turned in his grave when Q described his film Tasher Desh as “Tagore on an acid trip”. Although a certain Girish Karnad might think otherwise, Tagore’s classic dance opera on liberation still seems to possess commendable global relevance. Gautam Bisht of Zeenews.com caught up with Q, a true auteur, who expressed his elation about the film and his esoteric experimentation with the medium of cinema. Snippets from the conversation and the link to the trailer of the film.

Enlighten us about the Rome International Film Festival. How big is it for you that ‘Tasher Desh’ is being premiered there?

Rome International Film Festival is in its seventh edition. Marco Muller, who was the artistic director of the Venice Film Festival, has taken over the leadership of the festival from this year. The festival has shifted gears majorly, and as the line up this year suggests, this festival is soon going to be in the golden circle - which is why we chose to go with Rome in spite of having a huge amount of interest from Berlinale. I was amazed by the final selection here, and cannot contain my excitement as some of the biggest inspirations of my life will be here.

‘Tasher Desh’ is a play on liberation and you have always played with the themes of repression, subversion and to an extent, revolt. How challenging was it to take a Tagore classic and mould it into Q’s cult?

It was intensely difficult. I have been working on ‘Tasher Desh’ for the last twelve years; ever since I wanted to be a filmmaker. I know this play backwards since my childhood, the only Tagore piece I have ever been obsessed about. Given my apathy for romantic classics, I realised that my interest clearly lay in the revolutionary aspects of the play. I also knew that I didn’t want to change the script in any way, use the material in its pristine condition, and simply shift the way we look at it.
But applying my principles of physical, uninitiated and organic way of shooting to it was tremendously difficult with over 100 actors and really tough shooting conditions. I don’t know about the cult phenomenon, but just to be able to look at our history with punk eyes and transform the narrative from a soft nudge to a hard shove was quite a task.

Your previous movie, ‘Gandu’, became an international art house success. But back here in India, the audience had mixed reviews. The part that didn’t like it complained about the content of the film and also that sex and drugs were repetitively used as gimmicks to desperately attract attention. Even shock and boldness has a context. How do you react to this?

‘Gandu’ was supposed to shock general viewers, as a punk film should. So it did its job. What people refer to as a gimmick is a tool for me, one that brings eyeballs dancing towards work that would have otherwise been sidestepped. I love this form, and will be continuing to explore the ways in which one can create a space for freestyle cinema.

Tell us more about your pre-‘Gandu’ days. When perhaps you too, like ‘Gandu’, were living in oblivion and isolation with all these strange ideas. How tough was that?

It wasn’t tough. And I was never alone. There were always kind friends who gave me company and shared my tastes. What I rue is that fact that I am not being able to watch as many films as I did before we struck the ‘Gandu’ note. We spent seven years preparing and understanding the conditions, and trying to come up with a way to address our issues on screen. It was a long workshop, intense and exciting.

After the popularity and accolades that you have earned, does it now pressurize you to deliver every time you pick up a camera?

It surely does. But this is not a pressure to measure up to the last job done. The pressure is to find new ways of tackling issues and shooting things. To keep myself interested in the form. The most undesired pressure is being noticed. I was the proverbial fly on the wall earlier, but now that is a bit compromised. Still, the very thrill of being out in the open, armed with a naked camera, is too cool.

The popular nonsensical Bollywood cinema is a delight to the ‘’aam aadmi’. For him, it’s an escape from his own insignificance, and thus it is believed that commercial films serve a noble purpose. What are your views?

Oh! The great gods of Bollywood. Who shower your acolytes with some true blue entertainment. Turn our collective brains into chicken-feed and deliver us from any intellectual growth. May the light of knowledge never reach us. May cinema be redefined by your grace into a bag of wholesale potatoes. May the market determine what we like and transform us into joyous commodity- sucking crazy people.

We always pedestalise our gods and provide limited access to them. (The ban on AK Ramanujan’s work on Ramayana is an example). In ‘Love in India’, you explored the love story of Lord Krishna and looked at him as a historical figure. In the process, he comes out as promiscuous and incestuous which to a larger Hindu society would be problematic; but ironically, the film wins the national award for “family values”. What was your reaction?

Well, ‘Love in India’ was a documentary. And everyone knows that documentaries deal with the truth. As any bhakt will know from the depth of his/her soul, the god is forever naughty and does strange things. I wanted to understand this relationship, which is very different from any other god – worshipper one. The promiscuity and incestuous tendencies have serious meaning, and that is indeed what I was trying to focus on.

The national award took us all by surprise. Sadly I could not meet the President, but wallowed in the knowledge that finally we have been able to infiltrate the upper rungs of the social ladder and have been declared bona fide. Now I don’t pay parking tickets anymore!

Tell us something about Indian influences on your work, from the field of cinema and literature?

The most important influence for me is our vast mythology. A self proclaimed agnostic, I love the myths as stories that are immortal. I am most interested in the underbelly, not the Aryan concept of India but the Pagan. There have been some seminal work on this, and I admire those people who have been able to bend their minds around the colossal confusing noisy mess of the myths.
Closer home, I am in love with Kiran Nagarkar’s writings, the brilliant Bengali minds between the 40s and the 70s. Troilokyanath, Kaliprasanna, Nabarun Bhattacharya. I have been influenced by the 70s Bengali aesthetics that I grew up in, without really bonding with its idealistic inclinations. Music has played an even more important role in defining my creative sensibilities. The sound of Suman Chatterjee (now Kabir Suman), the rise of indie Bangla music. And now the new Indian-indie. I think we are living in very exciting times.

Though you make global cinema which tries to break free from any social outfit, you seem to take pride in your Bengali roots. Is it a conscious decision to produce your works through the Bengali platform?

Of course. I am a Bengali, and am completely in love with my language. Not the people or the space; which I am critical about. It is important for me to work out of Kolkata, fighting with the forces that negate the very things I love about the city and its culture.

Your films have a lot of philosophical and academic insights to it. Be it the postmodern plots or a scene in ‘Gandu’ referring to a certain Oedipus complex. Don’t you think such themes and metaphors reduce your films to an elite audience? To take my point further, I’ll say an off screen ‘gandu’ can never totally understand your film ‘Gandu’ based on his isolation and disillusionment.

I do not agree. This is a classist idea. Every human being has the same degree of perception and it is only our elitist views that reduce a large category of people to being subhuman. I don’t really care about academic orientation, not having any myself. The references in the film are always things that you will face in reality, in your life and around it. The problem we have is that our art has always been restricted to the elite. More public domain artwork will slowly shift this paradigm. I know for sure that auto-drivers in Kolkata have been singing some ‘Gandu’ songs.

After sex and drugs, what is the next taboo that you are planning to rip apart?

The holy pedestal on which we place some people, thereby making them obsolete.

In the end, I would not just congratulate you, but also thank you for making cinema that is making us proud. Films like these are a silver lining to our otherwise embarrassing cinema culture.

Oh, and here I thought I was the embarrassment!