Irengbam Jenny is a happy go lucky person. She has a keen interest in health-related topics and is proud to be a Manipuri. Coming from the North East of India, Jenny is blessed with great taste in food and fashion. She has evolved as a writer covering health and science. 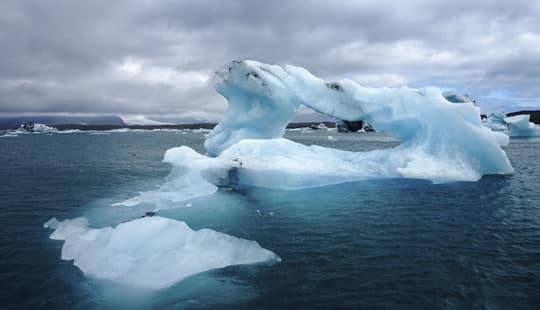 A glacier is a persistent body of dense ice that is constantly moving under its own weight. It forms where the accumulation of snow exceeds its melting and sublimation over many years, often centuries. Glaciers slowly deform and flow due to stresses induced by their weight, creating crevasses, seracs, and other distinguishing features. They form only on land and are distinct from the much thinner sea ice and lake ice that form on the surface of bodies of water.

Glacial ice is the largest reservoir of freshwater on Earth. Glacial mass changes are considered among the most sensitive indicators of climate change and are a major source of the variations in sea level.

There are two main mechanisms that contribute to observed sea level rise: (1) Thermal expansion: i.e. ocean water expands as it warms up; and (2) The melting of major stores of land ice like glaciers and ice sheets.

Global warming is the primary cause of current sea level rise. Human activities, such as burning coal and oil and cutting down tropical forests, have increased atmospheric concentrations of heat-trapping gases and caused the planet to warm by 1.4 degrees Fahrenheit since 1880.

Rising temperatures are warming ocean waters, which expand as the temperature increases. This thermal expansion was the main driver of global sea level rise for 75 - 100 years after the start of the Industrial Revolution, though its relative contribution has declined as the shrinking of land ice has accelerated.

What is the global threat of glaciers melting?

The key milestones for a possible future sea-level rise timeline are:

World sea-level is expected to rise 60cm to 70cm by 2100; but this is mostly due to thermal expansion because when the sea gets warmer, it expands. Significant glacier melting in Artic, Antarctic, Himalayan and Alpine regions could produce another metre of sea-level rise by around 2200.

Who is most at risk from glaciers melting and sea levels rising?

People living in impoverished areas are more vulnerable to the effects of sea level rise than richer places and people because they lack the capacity to change with the threat. Sea level rises over the next hundred years or so are likely to cause more mass migrations than mass mortality because the time-scale for sea level rise is such a long one that changes are likely to be gradual. It is unknown where the world`s poorest people will migrate in order to escape rising sea levels and what the consequences of this movement will be.

Where in the world will the greatest impact of climate change and melting glaciers be felt?

Melting glaciers have several different effects. The melting of glaciers in the Himalayas will affect the drinking supplies of the millions of people who rely on melt-water rivers. When sea levels rise, people living close to sea level will have their homes flooded. Out of the four places suggested: Asia, Africa, the Arctic and the Amazon, the impact of climate change and melting glaciers is likely to be felt most in Asia, because this is the region that has the highest population.

The Inter-Governmental Panel on Climate Change has projected major eustatic changes in sea-level over the next 100 years if CO2 levels continue to climb towards the danger level of 550 parts per million. It has long been recognised that any sea level rise will have a disproportionately bigger effect on some countries than others.

Current rates of sea level rise from satellite altimetry have been estimated in the range of 2.9 to 3.4 ± 0.4 to 0.6 mm per year for 1993–2010.This exceeds those from tide gauges. It is unclear whether this represents an increase over the last decades; variability; true differences between satellites and tide gauges; or problems with satellite calibration. The current altitude of a satellite which can measure sea level to a precision of about 20 millimetres is primarily complicated by orbital decay .Over water, the height is calibrated from tide gauge data which is needed to correct for tides and atmospheric effects on sea level.