Guns N’ Roses in Delhi: Waiting with (im)‘Patience’ for the next time! 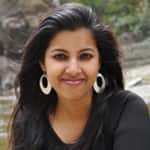 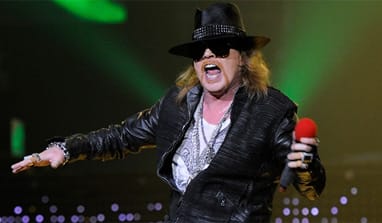 He is 50 years old, that crisp jaw is no longer a part of his visage, he is no longer a boy who can make girls go weak in their knees with his looks. But once on stage, Axl Rose knows the art of burning it to splinters. Delhi witnessed that very facet of this man at the last leg of Guns N’ Roses’ three-city India tour on December 12, 2012. Axl Rose jumped up and down on the stage, ran all over it, didn’t – even for a moment – stay still. The display of unbridled, raw energy on the stage from this middle-aged man – and my heart breaks into smithereens to call him that – was something that could have put humans one-fourth of his age to shame.

Coupled with Axl’s action on stage, were the guitarists’. Ron “Bumblefoot” Thal, DJ Ashba, Richard Fortus and Tommy Stinson are all demigods with that instrument – there can absolutely be no doubts about that. One after the other, the band belted out legendary numbers, new songs, just-for-fun riffs – making the crowd of some thousands go crazy with ecstasy. The guitarists-all made sure that Slash’s absence wasn’t felt as hard as it was ought to have been. Of course, stepping into the Guitar God’s shoes is no easy task, and it takes three of them to compensate for one – but the new line-up is nothing short of brilliant.

Out of the classic line-up, that comprised the legendary Slash, Izzy Stradlin, Duff McKagan, Steven Adler and Axl Rose, only Rose is a surviving member. The band now comprises keyboardist Dizzy Reed, lead guitarists DJ Ashba and Bumblefoot, rhythm and lead guitarist Richard Fortus, bassist Tommy Stinson, drummer Frank Ferrer and keyboardist Chris Pitman; all of whom conjured up a storm on the stage at the Leisure Valley Grounds in Gurgaon during their concert.

The opening act of the night was by a newly formed band from Texas, Brand New Machine. Once they cleared the stage, after a brief hiatus and extraordinary punctuality, Guns N’ Roses pounced on to the microphones with ‘Chinese Democracy’, followed by `Welcome to the Jungle`. One after the other, the rockstars threw out their legendary numbers at the audience, punctuating them with other newer ones. The crowd of about eight thousand couldn’t have asked for more: Christmas had just come two weeks early!

Axl’s stint on the piano with ‘We don’t need no education’, and then the smooth transition from that to ‘November Rain’ left people spellbound to say the least. Once he began crooning the famous rock ballad – one of the numbers of that genre that deserves to be listened to before a person dies, undoubtedly – people didn’t know how to restrain their excitement… And like the song says, “… and if you wanna love me; then darlin’ don’t refrain!”, the ones present did not even go through the pain of holding themselves back – it just didn’t work that way. Unless one lets go of that certain emotion that’s always dying to set itself free, a song of the league that ‘November Rain’ belongs to, can’t be felt. The experience – put in crude, blatant terms – was one colossal orgasm.

DJ Ashba’s introductory solo was followed by ‘Sweet child o’ mine’, and had the entire place shouting the song out in unison. Songs like ‘You will be mine’, ‘Don’t cry’, ‘Patience’ – with Axl whistling away with the passion of one who’s been there and known it all, ‘Live and let die’, were all offered to the audience with generous doses of adrenaline-pumping crazy action from the people on stage.

Something that was instrumental in transcending the concert from the realm of the extraordinary to the ethereal was the fact that it was dedicated to Pandit Ravi Shankar, the Sitar maestro who passed away that morning. Axl’s declaration on stage was followed by Bumblefoot and Richard Fortus letting go of their electric guitars and picking up acoustic ones – pulling off a sequence which sounded miraculously similar to one by the seven-stringed instrument.

The concert had it all – unabashed exhibition of vigour, with the band breathing life into each of the numbers that they played on stage. For a period of three hours flat, the band poured out their consummate skills over the audience – leaving people mad with glee. They banged their heads, screamed the lyrics till their lungs wouldn’t allow any more: satisfaction was writ large on every face present at the gig. Rose added a tinge of surprise at the end of the performance – after the lights had gone out and the crowd had begun to disperse, he made his band mates play another extra song. So that when they actually left the stage, spectators were left hankering for more!

There are rock concerts. And then there’s this rock concert. One where people’s insides are torn asunder, where their idols on stage leave such an indelible dent on their minds that every single person emerges from the gates of the venue transformed into a new being altogether. Axl Rose and his boys made sure that their impact on the listeners is nothing short of unforgettable.