I have envisioned Ranveer Singh as the main character of my book: Amritanshu Pandey 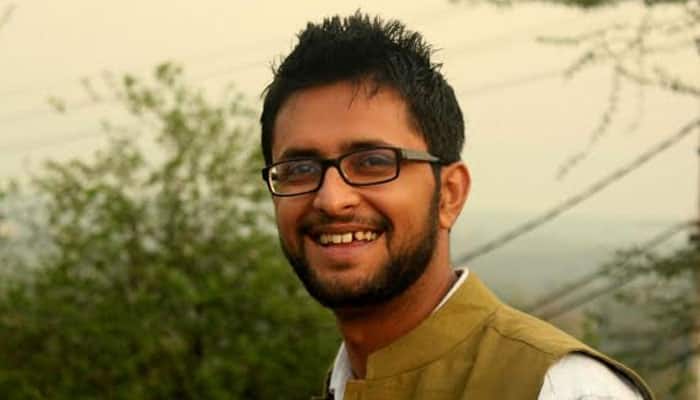 Amritanshu Pandey's debut novel `The Seal of Surya` was launched a few days back and has caught the eye of many readers.

The author is an Indian writer from the city of Varanasi and at a time where other contemporary authors are busy selling chick lit and novellas, he has dabbled in historical fiction.

In an interview with Anindita Dev, from Zee Media Corp, Pandey talks about his book, his journey and his wish to see Ranveer Singh as the protagonist of his book, if it is adapted into a Bollywood movie.

Your debut novel, `The Seal of Surya` was launched a few days back. Why did you chose to debut with a mythical narrative?

I would submit that this narrative is not mythical but historical. Mythical implies the usage of mythological motifs such as magical mantras, teleportation, impossibly long life-spans, non-human sapient creatures etc. whereas this novel is a human story that seeks to provide a historically plausible account of ancient Aryavarta.

I did not always plan to debut with a historical narrative, as my prime aspiration continues to be in the field of science fiction. But while my science fiction projects lie in dormancy, it is this project that got completed and thus saw the light of day. I think it is more a matter of how things pan out than any deliberate intent.

Tell us in brief the idea behind the novel?

The idea behind this novel is to provide a biography for early Aryavarta, its first king and first tribes.

Indian history either begins with the invasion of Alexander or takes itself impossibly back to an age of immortal Devas. Neither account seems satisfactory to me. If Kashi and Prayaga are some of the world’s oldest cities- who founded them?

This novel is intended to provide answers to similar questions through the life of Aryavarta’s first king- Ikshvaku.

Give us an insight into the main character from 'The Seal of Surya'?

The main character of this novel is Ikshvaku- the first king of Aryavarta and founder of the Suryavansha. As a young boy, he is aware of the legacy descended to his family- being the son of Vaivasvat Manu and great-grandson of Maharshi Kashyapa. He also sees the growing threat posed to his people by the ‘Anarya’ tribes such as Rakshasas.

It is in this context that he decides to claim the title of King, which would make him the supreme leader of the Suryavanshi and finally provide a united front to Rakshasa aggressions. The novel takes us from the moment he first asserts his kingship to the moment where he breathes his last, having lived a life of duty, quest and compassion.

Are you planning to come up with a series of the novel?

Yes, this novel is book one of a larger series - The Scrolls of Aryavarta. At the same time, the novel is also a standalone. Each consequent book in this series will be a standalone as well, but together the novels will cover a 2000 + year period of ancient Indian history set in the same fictional universe.

For example, the next novel will be based on the life of Nahusha- an early Somavanshi king. I invite you to visit the official website to see the larger picture I wish to paint.

Do you think the readers are biased towards the books of foreign authors?

I do not think so. The Durjoys, Chetans and Amishs have proven that to us many times over. But I think what the discerning Indian reader is looking for is not simply a run-of-the-mill novel but something that can stand on its own even in the international literary scene.

Why would a reader who has read a Tolkien or Martin settle for anything less from an Indian author? For example, Samit Basu’s science fiction novels hold credibility even in America. That is the true test of any author in the genre of fiction - does the story appeal to people across the world?

What draws you to this genre? Do you intend to write short novellas, romance or any other genre?

This genre- historical fiction- is a natural blend of two interests I have held all my life - writing and history. Further, I am dissatisfied with nationalist claims of Indian history that present more absurdities than explanations.

Take the example of Ganesh- it is absurd to claim that ancient India possessed surgical technologies so advanced that they could fuse the head of an elephant onto the body of a man. What is far more plausible, and is the sort of explanation I could accept, is that the ancient tribes who first saw a man riding an elephant could not process their awe and wonder in any other way but to conjure the vision of a half-man and half-elephant.

I am drawn to the genre of historical fiction because it allows me to separate the plausible from the mythological in Indian history. But my first love remains science fiction, and that is the genre I will return to someday (or at least speculative fiction). I am open to short novellas too, if they come to me. But I do not see myself dabbling in the genre of romance.

If your book is adapted into a movie, which actor/actress would you want to be in it?

Haha- now that is something to occupy my fantasies for a while! Taking it as a purely fantastical exercise, I have envisioned Ranveer Singh as the character of Ikshvaku ever since I saw him in Lootera. My first novel does not really have strong or well-etched female characters, but I think Konkona Sen Sharma would provide much gravitas to the character of Ila.

Which writer's work do you look up to?

What do you think of “trailers” for books?

I am learning as I go along that the promotion of a book is almost as important as writing it in the first place! Trailers are a good way to generate excitement and curiosity, though I think using teasers and trailers for book covers (not just books) is going a tad too far- which again, is my opinion only.

Do you think that giving books away free works and why?

The books that do well are those that are recommended the most. Most readers do not buy books without them being endorsed by a friend/ expert. In such a market, giving books away for free can certainly work- provided the book is good enough to begin with. I may give a book away for free, and if its recipient likes it he/she would recommend it to ten more people.

What are your upcoming works?

In the immediate future I think I will come up with the next book in The Scrolls of Aryavarta series- The Ring of Soma, based on the life of Nahusha. He was a naturalist king who defied the institutions of the rishis and the existence of divine Devas, and as a result was cursed from the high seat he occupied in the politics of Aryavarta. I am also working on a speculative fiction novel which is quite grand and ambitious in scope- thus might take me a few years to finish. At the same time, I have started contributing opinion-pieces on website. Finally, I’m also writing a non-fiction work that deals with naturalism, rationality and scepticism in the Indian context.