Durga Puja is also referred to as Durgotsava in Bengali, which marks the victory of Durga over the buffalo demon- Mahishasura. 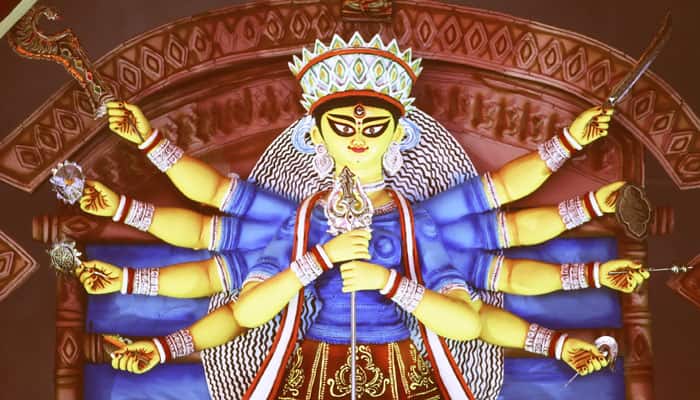 It's that time of the year for the Bengali Hindus and Assamese, who wake up to the `Dhak`(drum) beats every morning, following the ten-day long festival of Durga Puja. One is lost in worship, and in life and soul. A deep sense of pride and enthusiasm takes over you. You are lost in revelling the cultural bonanza attached to the customary practices of the puja.

Durga Puja is also referred to as Durgotsava in Bengali, which marks the victory of Durga over the buffalo demon- Mahishasura. It symbolises the victory of good over evil. It refers to all the six days observed as Mahalaya, Shashthi, Maha Saptami, Maha Ashtami, Maha Nabami and Vijayadashami.

The worship of goddess Durga takes place on a grand scale for the people belonging to the eastern part of the country, and you have to witness it to understand the magnitude of this festival.

Mother Durga represents 'shakti', the feminine force which guides us and destroys all the evil from earth. The celebration of Durga Puja is culturally significant and holds emotional value for the people of Bengal, Assam and adjoining areas.

Durga Puja is also about the annual visit of goddess Durga with her children to her ancestral home on earth, and her reunion with Shiva on Vijayadashami i.e, the last day of the Navratri. She is the destroyer of all evil and and embodiment of power.

Throughout the 6 days of this festival, the cities transform and show cultural mileu. Pandals are set up in all the nooks and corner of city, wherever possible. The idols are creatively crafted by the potters, out of clay and the life-size idols of Durga along with her children are installed in the pandals.

Community puja or `Sarbojanin` puja, take up the role of organising the puja in their locality by housing idols in pandals and make-shift temples, each community trying to outdo the other, competing in decoration, themes celebration, food, drink and of course the rituals. The themes again are not ordinary, they keep evolving over the years (animated theme, Harry Potter, Cave, Rocket theme, Space and so on).

The five-day worship of the goddess ends with a grand procession of immersing the idol in the nearby river. This marks an emotional moment, as she leaves her home to reunite with Shiva, marked by Vijayadashami. This indicates Durga's victory over the evil and in Northern part of the country, it is known as Dusherra which marks Rama's victory over the demon Ravana.

During the five-day celebration, devotees abstain from alcohol, meat, onions, and wheat. This is something similar to people observing fasts during the Navratras.

The end of Navratri calls for an auspicious time for new business or considered lucky for any new work, following a number of rituals which leads to `Shubho Bijoya`.

After the last day of the Navratri, known as `Vijaydashami`, where idols are taken in grand procession for the immersion-`bhaashan`, Hindu Bengali exchange greetings for a prosperous year and take blessings from elders.

The last day has an emotional significance, as it is always difficult to bid farewell to Maa Durga, after the week long grand celebration and worship.