What every Kashmiri Jihadi should know 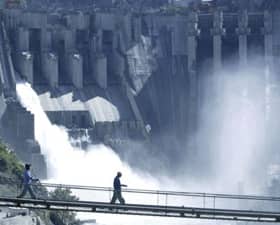 After a detailed examination and analysis of the relationship between the two nations, it concluded that `in order to prevent a conflict between Punjab and Sindh, and to prevent a possible secession of Sindh and Balochistan, Pakistan needs physical control over the Chenab catchment region in Jammu and Kashmir. It needs sites to build dams, to store, divert and regulate water flows. It also needs additional fertile land. Jammu and Kashmir is a source of Pakistan`s water and food security. It is a real estate dispute for strategic reasons.’

Pakistan’s concerns stem from the fact that the headwaters of the Indus River System, which provide almost all of Pakistan’s water, are in Kashmir.

In other words, India could, if it wanted, turn Pakistan into a desert by either damming or diverting the rivers that flow into Pakistan. But despite numerous provocations, it hasn’t.

The Eastern rivers of this system comprise the Sutlej, the Beas, and the Ravi. The western rivers are the Indus, the Jhelum and the Chenab.

Brokered by the World Bank (or the International Bank for Reconstruction and Development, as it was then known), this treaty gave the waters of the Western rivers to Pakistan, while the eastern rivers stayed with India. India was barred from undertaking any activity on the western rivers which could impact their flow into Pakistan. But it did allow India to construct run-of- the-river power projects, with limited reservoir capacity.

India is thus literally between a rock and a hard place when it comes to hydel projects in J&K. If it adheres to the treaty, then it compromises development in J&K. And if it builds hydro-electric dams, it risks facing rebukes and more from Pakistan.

Despite that, that treaty weathered two full fledged wars (1965 and 1971) over Kashmir, and the war in Kargil. It survived heinous acts of terrorism against India plotted and orchestrated from Pakistan.

But all that is cold comfort to Pakistan, which keeps accusing India of attempts to violate the pact, and warns of war --including a nuclear attack.

After the release of The Final Settlement, I had written an article arguing that we should leverage this natural advantage. After all, all’s fair in love and war. Why should moral and ethical issues be constraints against a neighbour which obviously has none?

Of course, damming or diverting not one, but three rivers, is near impossible. But until then, what can be done is to ensure that every jihadi, every Pakistani, knows that Kashmir is not about religion, but about Pakistan’s deep insecurity over water. That they have been conned for over 60 years by their leaders into believing that Kashmir was a religious issue.

Apart from the constant refrain that India is stealing its waters, some rabid but popular Pakistani analysts like Zaid Hamid even accused India of engineering the floods that devastated the country in 2010. NASA’s satellite images clearly showed that the floods were caused by unusually heavy monsoons potentially caused by the La Nina effect.

Last week, the Strategic Foresight Group released another booklet, titled The Indus Equation, which is perhaps one of the most comprehensive studies ever conducted on the water issue between India and Pakistan.

According to Gitanjali Bakshi, the author of the report, “Pakistani militant groups as well as right-wing newspapers are constantly using ‘water’ in their flamboyant displays of saber rattling. On March 2nd, 2011, chief of Jamaat-ud-Dawa’s political wing Prof. Abdul Rahman Makki said that Pakistanis would have to be ready for every kind of sacrifice in order to end the Indian control over water (Daily Pak). The Editor-in-Chief of right wing Urdu newspaper Nawa-i-Waqt, Majid Nizami, says on a regular basis that Pakistan should use its nuclear arsenal to destroy Indian dams that bloc the flow of water into Pakistan.”

But these speeches, she says, are not based on fact: “India has given up close to 80% of the Indus Waters in the 1960 treaty; it is well below the storage capacity permitted on the Western Rivers under the IWT and it has only built run-of the-river dams which it is permitted to do – a fact conceded to by former Pakistani Water Commissioner Jamaat Ali Shah.”

As for India using water as a weapon, she says: “The findings in the report hold a contrary viewpoint. Pakistan and the international community should realize that India is not blocking the flow of these rivers nor does it intend to release floodwaters to drown Pakistan and the past 50 years of ‘water neutrality’ should elucidate this fact. All this argument over water is not only leading to a security threat but it is a waste of time, effort and money. The IWT is designed to handle technical and legal disputes over the Western Rivers. Let’s leave this negotiation and arbitration to the experts.”

“Political talks,” she believes, “should include issues like terrorism that do not enjoy common and legally-bound agreements and if there are talks on water they should be about the real challenges of tomorrow –

Climate Change, Water Distribution and Demand Management. Of course these terms don’t raise as many eyebrows as ‘water wars’, but this is where the true solution to tackling water problems lie – clear and efficient resource management.”

According to The Indus Equation, “Pakistan’s water situation is not simply predicated on water flows from India. The low supply of water in Pakistan is largely due to water conveyance losses, poor infrastructure, increasing desalination, water pollution and climate change. ...Even climate change and the retreating Himalayan glaciers have contributed to the water crisis in Pakistan. Often times India is blamed for all of these factors. It is true that the majority of Pakistan’s water resources flow from India, however, India has no control over Pakistan’s internal mismanagement of water resources or climatic conditions.”

The report also concludes that Pakistan’s ‘water anxieties’ are based more on emotion than on fact. There are very few countries in the world that enjoy Transboundary Water Treaties with their ‘upper riparians’ and the Indus Water Treaty is considered by all standards as one of the most successful and ideal international arrangements.

According to sources, the petition on the Kishanganga Dam on the Jhelum, which Pakistan asserts violates the Indus Water Treaty, might be heard at UN International Court of Arbitration towards the end of July. No doubt this will invite more sabre rattling on the issue of water and false accusations about Indian ‘water aggression’.

“At that time, hopefully, this report and articles like yours will provide a voice of reason, and help clarify some of the misconceptions that Pakistanis and even Indians have about Indo-Pak water issues,” says Gitanjali.

Until then, India has to understand that all the power in the world is no good unless you are prepared to use it.

-- The author is the Editor-in-Chief of india.com