Whatever happened with me shouldn’t be repeated with others: Manoj Kumar’s message to Kapil Dev 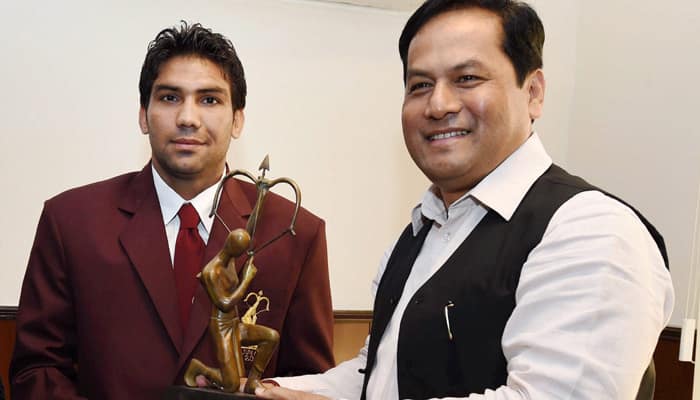 A sports fanatic. Currently heading a team of passionate writers for Zeenews.com. Stories of success as well as failures of sportspersons from across the globe motivate him each day to never settle for mediocrity.

Indian boxer Manoj Kumar caused a stir recently when he lashed out at former Indian cricketer Kapil Dev, who led the committee that refused to give the coveted Arjuna award to the 2010 Commonwealth Games gold medallist.

The Sports Ministry later admitted their mistake where they had mixed his name up with another junior boxer, also named Manoj Kumar, who was not considered for the Award because of doping allegations in a junior tournament.

In an exclusive chat with Suyash Srivastava of Zee Media, Manoj spoke about the tough times while he fought a legal battle and also his dissatisfaction over being ignored for the prestigious award early on. Meanwhile, his coach Rajesh too shared his views on Manoj.

Manoj, as we all know, you were quite upset with what had happened with you after you expressed your resentment towards Kapil Dev. Once you finally received the Arjuna Award, did you get a call from him?

Manoj: No, I did not receive any call or message from Kapil Dev to congratulate me or whatsoever. It was very disappointing for me to come across such a situation where I was ignored despite being a deserving candidate.

What message do you have for Kapil Dev?

Manoj: We would just like to say that he should never repeat what happened with me with any other athlete. Today he might be at the pinnacle, but he too was once unheard of. We appeal to the committee and all its members to consider all the deserving candidates for the Arjuna award in the future.

Now that you have received the award, tell us the reaction of your family members and whom would you give the credit for it?

Manoj: It is a matter of huge pride for me to receive the Arjuna Award. Everybody at home is extremely happy. As far as giving credit is concerned, I owe a lot to my coach Rajesh who stood by me through the toughest of times. Since childhood, he has been with me and it is saddening to see that despite having done so much for the sport, the Haryana government didn’t find him suitable enough for any kind of a job.

What is your stand on the controversy which was triggered in the Asian Games by boxer Sarita Devi?

Manoj: There is no reason why she should be punished for anything. Whatever happened with her at the Asian Games was wrong. Several boxers who stood by her during that time are no more supporting her. But I am still standing by her.

Rajesh (Coach): An athlete puts in enormous hard work to win a medal for the country. But when they are robbed off one, due to certain circumstances, they do get sentimental. The same happened with Sarita Devi. When she felt she was robbed off a gold medal, she got very emotional and had to pay a price for it. But she apologised later. Everybody saw what she did and action was taken against her. Why nobody bothered to challenge the decision of the referees? Why was no action taken against them?

But Mary Kom did express sympathy and support for Sarita Devi at the Asian Games.

Rajesh (Coach): She did that only once. She is a role model in boxing. Her words could have made a lot of difference. If you see today, there are hardly any boxers supporting Sarita Devi.

Earlier, another boxer Jai Bhagwan was supposed to get the award in your place. Has your getting the award affected your relationship with him?

Manoj: We are a strong community and there are no differences between me and Jai Bhagwan. He was always like a brother to me and will remain so.

How proud are you of Manoj’s achievement?

Rajesh (Coach): It's a very big achievement for us. A lot of effort goes into training and getting an award or a medal in boxing. In cricket, there are around 15 countries who participate. But boxing is played all over the world. Manoj has put in a lot of hard work and this award means a lot to both of us.