Barca, who toyed with United for the majority of the encounter, sealed a 4-0 aggregate victory and will meet either Porto or Liverpool in the last four. 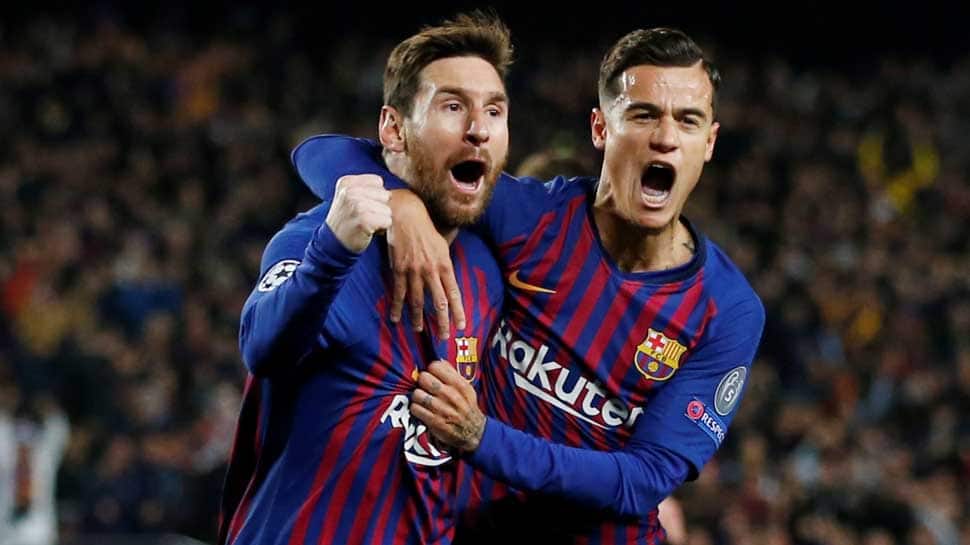 BARCELONA: Lionel Messi produced another masterful Champions League performance to knock out Manchester United and fire Barcelona into the semi-finals for the first time in four years, scoring twice in a 3-0 home win on Tuesday.

Barca, who toyed with United for the majority of the encounter, sealed a 4-0 aggregate victory and will meet either Porto or Liverpool in the last four.

Messi had failed to score in his last 12 quarter-final appearances, but he settled his side`s nerves after a bright start from United, collecting a misplaced pass from Ashley Young and curling into the bottom corner in the 16th minute.

The Argentine then pounced on another lapse from United`s defence four minutes later to win back possession high up the pitch and fire a shot from outside the box, which squirmed under visiting keeper David de Gea.

Philippe Coutinho finished off a therapeutic win for the Catalans, after three quarter-final failures in a row, by curling into the top corner in the second half.

"This was a spectacular performance, this is what we are all about," Messi told reporters. "The first five minutes we were a little shy and nervous, perhaps the scoreline gave us a strange feeling, but then we took control of the game."

United coach Ole Gunnar Solskjaer’s greatest night as a player came at the Nou Camp, but after losing the first leg at Old Trafford 1-0, his team needed to become the first side to win a European game there in 31 matches in order to progress.

They clung to the hope of another famous European escape act after last month’s miraculous 3-1 win at Paris St Germain and made a strong start as Marcus Rashford hit the crossbar in the opening stages.

They also survived a scare when a penalty awarded to Barca for an apparent foul by Fred on Ivan Rakitic was overturned after a VAR review.

Yet their hopes were soon extinguished when Young was caught in possession on the left wing and Messi seized the ball, scurrying across the pitch and holding off more United defenders before bending a superb shot past the outstretched De Gea.

The Spanish goalkeeper was left embarrassed for Messi’s second goal as the Argentine`s tame shot crept under his body.

"We did well to get here but we could see the difference between the two teams. We started well, in the first 15 minutes we thought we could get something here and then they got the two goals," said Solskjaer.

"You know that at this level you cannot slip up and make mistakes and you have to take your chances when you get them. We didn’t capitalise on our great start, then they have their first two shots on target, they get two goals then it`s game over."

United looked down and out and Messi nearly dealt them further pain before halftime by sparking another quick break, but this time De Gea thwarted the Catalans, pushing away Sergi Roberto’s shot on the goalline.

De Gea was taunted by Barca fans in the second half, which turned into a procession for the home side and the out-of-form Coutinho turned up the party atmosphere with his sensational strike.

The nearest United came to finding the target after the break was when Barca keeper Marc-Andre Ter Stegen turned an Alexis Sanchez header around the post late on.