The league leaders have only themselves to blame for the draw that comes just days before Wednesday`s Champions League last-16, first leg against Tottenham Hotspur in London. 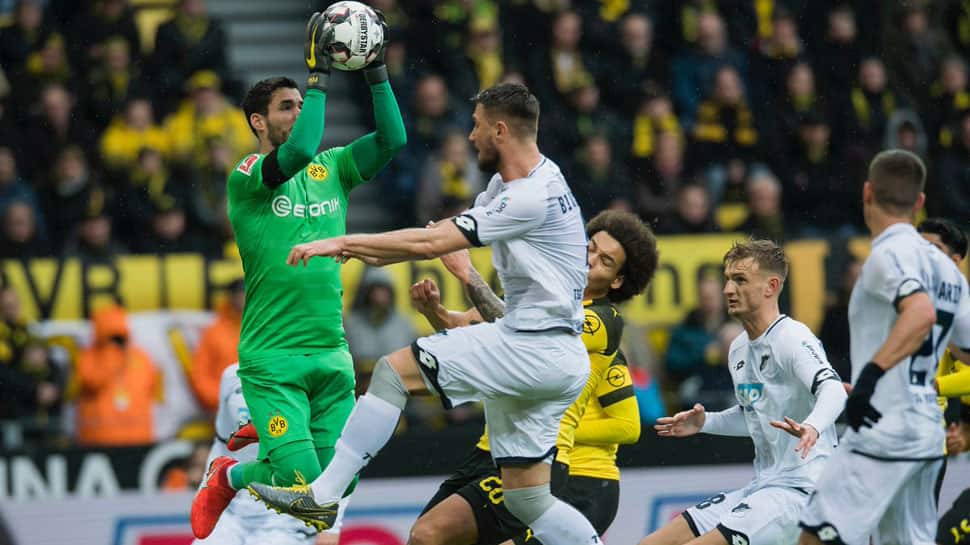 Bundesliga leaders Borussia Dortmund inexplicably surrendered a three-goal lead in the second half to draw 3-3 against Hoffenheim on Saturday after completely dominating for more than an hour.

The league leaders have only themselves to blame for the draw that comes just days before Wednesday`s Champions League last-16, first leg against Tottenham Hotspur in London.

Jadon Sancho, in the absence of Dortmund captain Marco Reus, took control for the hosts in the first half, firing in to give them the lead and slicing through the hapless Hoffenheim defence at will.

The England international then set up Mario Goetze for Dortmund`s second goal before combining with Goetze to set up Raphael Guerreiro for an easy tap-in in the 66th.

Sancho almost got a second goal in the 75th but his low shot hit the post and bounced clear before the hosts stepped off the gas, allowing Ishak Belfodil to cut the deficit in the 75th.

Pavel Kaderabek then rose above his marker to head in with seven minutes left and set up a nervous finale.

The visitors` memorable comeback was completed when Belfodil headed in a free kick in the 87th.

"It was very bitter after a very good first half with Sancho playing an outstanding game," said Dortmund assistant Edin Terzic, standing in for head coach Lucien Favre at the news conference after the Swiss missed the game with the flu.

"We lost possession far too often in the second half."

Dortmund scorer Goetze said they made far too many mistakes, especially after such a dominant first hour.

"When you lead 3-0 at home and then you play a 3-3 then it obviously is extremely bitter," Goetze told reporters.

"That should never have happened. Especially after such a performance for large parts of the game and after a strong first half."

Dortmund are top on 50 points with champions Bayern Munich in second place on 42 and in action against Schalke 04 later on Saturday.

Borussia Moenchengladbach, dropped to third place on goal difference behind Bayern after their 3-0 loss to Hertha Berlin.