Eto'o recently took to his official Instagram account to announce that he is calling time on his illustrious 22-year-old football career at the age of 38. 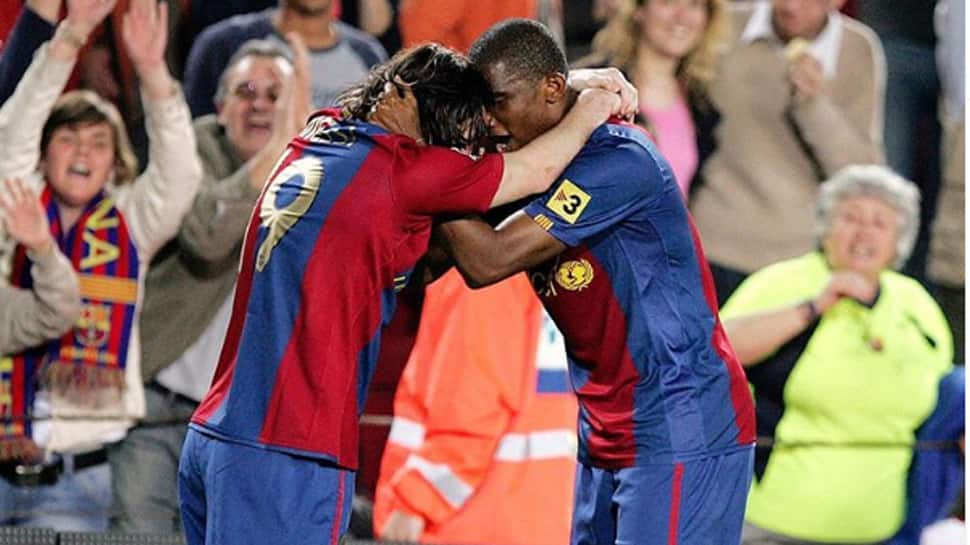 After Barcelona legend Samuel Eto'o announced his decision to hang up the boots, tributes started pouring in from the football fraternity for the retiring striker.

Eto'o, who kickstarted his career in 1997 with Real Madrid, recently took to his official Instagram account to announce that he is calling time on his illustrious 22-year-old football career at the age of 38.

"The end, towards a new challenge. Thank you all big love," he had posted.

Sharing a picture of him with Eto'o in Barcelona jersey from the ground, Messi said that he thought that the legend would retire from the game at the age of 40. He further wished good luck to Eto'o for future endevours.

"Have you decided to stop, Samu? I thought you would reach 40 at least ... All the luck in the world in what you want to do from now on, genius," current Barcelona skipper Messi posted on Instagram.

"Congratulations for this great career Samuel Eto'o and very good continuation for the new challenges that await you... Africa is very proud of one of its greatest ambassadors," Drogba wrote.

"Thank you for all brother. It has been a pleasure to share team with you. Good luck in this new stage," Puyol said.

At the age of 17 years, Eto'o became the youngest footballer to feature at the 1998 World Cup when he played for Cameroon during the prestigious event.

In 2004, Eto`o joined Barcelona from Mallorca and went on to guide the Spanish side to two Champions League titles, four La Liga titles, two Supercopa de Espana titles and one Copa del Rey.

The former striker also became the most La Liga capped African player of all time during his stint with Barcelona.

During his illustrious career, Eto'o also bagged African Player of the Year award four times to equal Cote d`Ivoire`s Yaya Toure's record of winning the trophy for the most number of times.