France star midfielder Paul Pogba followed Cristiano Ronaldo's footsteps as he removed a bottle of Heineken bottle placed on his table at a press-conference. 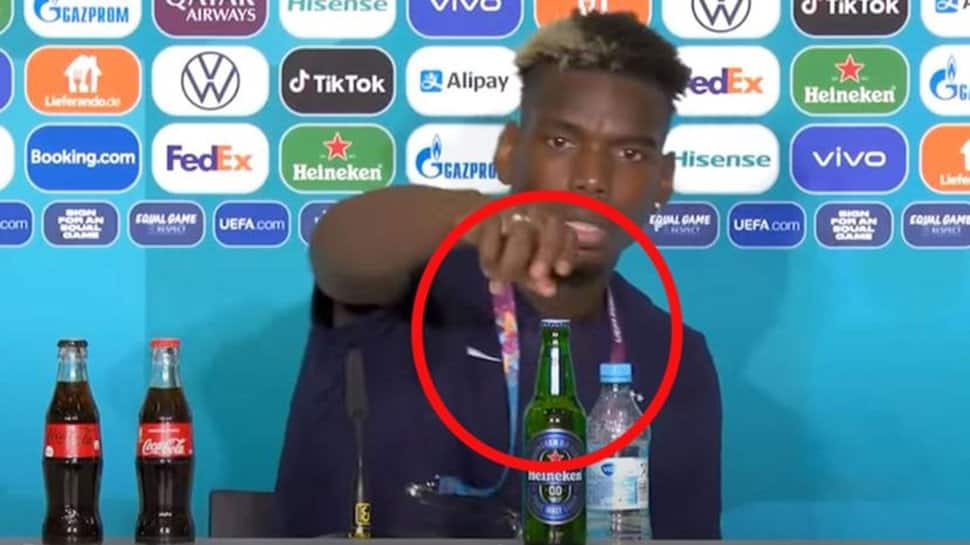 France star midfielder Paul Pogba followed Cristiano Ronaldo's footsteps as he removed a bottle of Heineken bottle placed on his table at a press-conference. The beverage company is one of the sponsor of UEFA Euro 2020, but Pogba, who follows Islam, didn't seem pleased with the bottle placed in front of him.

Pogba is not the first Muslim sportsperson to openly display their reluctance towards promoting or being involved in any celebration involving alcohol. England cricketers Moeen Ali and Rashid Khan fled from champagne celebrations, when England lifted the 2019 ICC Cricket World Cup.

Pogba on numerous ocassion has expressed his religious belief, with the latest being during the holy month of Ramadan, when the midfielder went on to continue with a Europa League tie despite being on fast. He has also publicly stated that he doesn't consume alcohol in any form.

The move by the Manchester United star comes a day after Ronaldo removed Coca-Cola bottles placed on his table and urged people to consume water. The move by Ronaldo saw a significant dip in the beverage's stock value and is reported to be at least $4 billion.

Meanwhile, World Cup-winners France kicked-off their Euro 2020 campaign with a 1-0 victory over Germany on Tuesday (June 15), courtesy of an own goal by defender Mats Hummels, as the sluggish-looking hosts lost their opening fixture at the European Championship for the first time.

The world champions went ahead in the 20th minute when Pogba’s raking pass was fired back across the goal by Lucas Hernandez and defender Hummels shanked the ball into his own net as he tried to clear it.