Tiger sighted in Gujarat for the first time in three decades

A tiger was last seen in south Gujarat's Dangs forests in 1989 but over the years, the four-year surveys conducted by the Forest Department had ruled out the presence of tigers in the state. 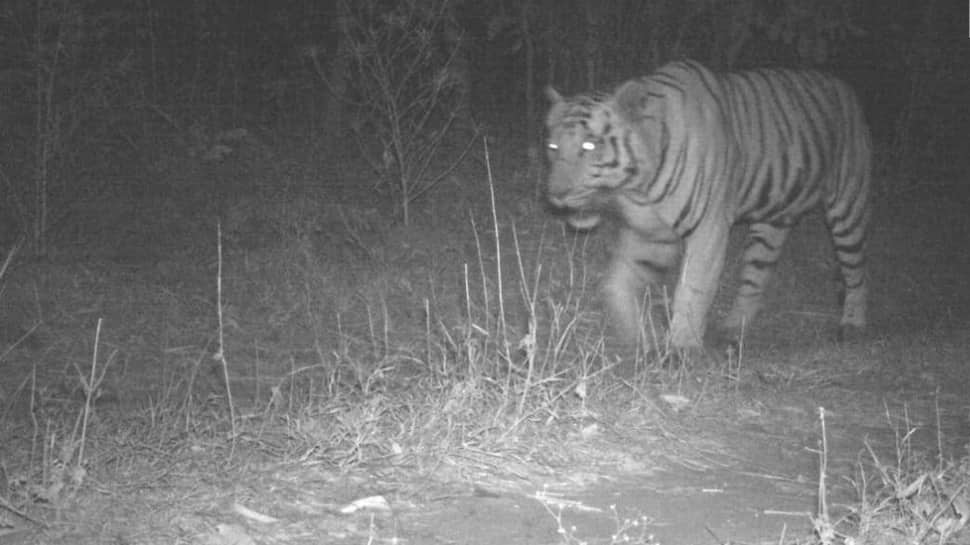 GANDHINAGAR: In a first in 27 years, a tiger has been spotted Gujarat's Lunawada forests in Mahisagar district. With this spotting, Gujarat has become the only state in the country which hosts all the three major big cat species: lions, tigers and leopards.

A tiger was last seen in south Gujarat's Dangs forests in 1989 but over the years, the four-year surveys conducted by the Forest Department had ruled out the presence of tigers in the state. However, State Forest Minister Ganpat Vasava on Tuesday said the image of a seven to eight-year-old tiger has been captured in the night vision cameras for the first time in about three decades.

"It has now been confirmed. A tiger in the age-group of 7 to 8 years has been seen in Mahisagar district," Vasava said.

Gujarat: A tiger was spotted by a camera trap in Lunawada, Mahisagar on 11 February. The tiger is believed to be 7 to 8-year-old. Gujarat now has the presence of both tigers and lions. pic.twitter.com/bHbW3MQ1eH

The minister added that it was not confirmed yet whether it was a lone tiger or if there were more. The tiger may have also come from any of the neighbouring states - Maharashtra, Madhya Pradesh and Rajasthan. The Minister said that he had contacted the Madhya Pradesh government and was told that a tiger from its reserves near Ujjain was "missing" for some time.

"The Madhya Pradesh government has said that a tiger has gone missing from Ujjain. It is possible that the tiger seen here can be from any of these neighbouring states which have tigers," the minister added.

A controversy over the presence of tigers had erupted after a government school teacher Mahesh Mahera had last week said that he had spotted a tiger near Boriya village in Lunawada taluka on February 6. He had claimed to have spotted the tiger on his way back from school and had even shot a video of the big cat on his phone.

The video had been dismissed as some state government officials who said that it was not a tiger but a wild boar. However, the Forest Department launched an intensive manual search at the insistence of some wildlife experts and also installed night vision cameras in the vicinity of the sighting.

"Camera traps were set up and we have now got visual evidence of a tiger in the area. Two of the cameras have caught the image of the tiger. It is not necessary that we will find the tiger in the same area, so we will continue to keep a watch," Vasava said.

The state government will be contacting the National Tiger Conservation Authority (NTCA), which has the data of tigers across the country, to ascertain where the feline came from.