The BJP on Sunday claimed that the khichdi' coalition of opposition parties won't be able to oust PM Modi from power. 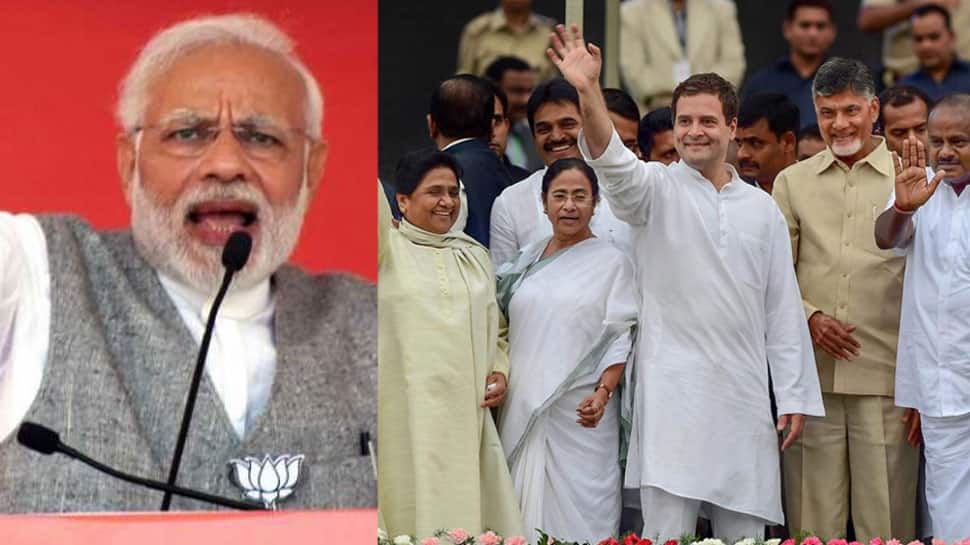 KANPUR: While claiming that the strong leadership of Prime Minister Narendra Modi "strikes extreme fear" in his opponents, senior BJP leader and Uttar Pradesh Minister Sidharth Nath Singh said on  Sunday that the 2019 parliamentary election would be a fight between the 56-inch chest and the 'khichdi' coalition of opposition parties.

He took a dig at the Opposition's show of unity at a rally in Kolkata on Saturday and said the 'khichdi' alliance was of "selfishness and corruption".

"Prime Minister Modi strikes extreme fear in his opponents who are forming 'khichdi' alliance to challenge him, but the BJP will crush all alliances," Singh told a press conference here, a day after the Kolkata rally organised by West Bengal Chief Minister and Trinamool Congress leader Mamata Banerjee, in which leaders of around 20 opposition parties took part.

Noting that several opposition leaders had prime ministerial ambitions, Singh said they should decide among themselves who will be the prime minister on Mondays, Tuesdays, Wednesdays, Thursdays and Fridays.

Taking a swipe at Congress president Rahul Gandhi, the BJP leader said he should be the prime minister on Saturdays and Sundays since that is all he "can manage".

Singh said that the opposition parties were getting united only to defeat PM Modi and did not have any "future roadmap for the development of the country".

Hitting out at the opposition parties, Union Minister Ravi Shankar Prasad too said that the only agenda of the "Mahagathbandhan" is to remove PM Narendra Modi which is not going to work in 2019 Lok Sabha polls.

"There has been a so-called Mahagathbandhan rally of the opposition parties in Kolkata. It was a rally of those who could not see each other eye to eye. Today they have come together. From their speeches, it was evident that their only agenda is to remove PM Modi," Prasad told reporters.

He also took a jibe at the opposition parties and asked who would be their leader against NDA`s Narendra Modi.

Meanwhile, PM on Sunday rejected Opposition's allegations that the BJP government's decision to provide 10 percent reservation in education and jobs for the economically weaker sections in the general category was politically motivated with an eye on upper caste vote in the Lok Sabha polls.

Calling the charges as "illogical," the Prime Minister told BJP booth workers from Hatkanangale, Kolhapur, Madha, Satara in Maharashtra and from South Goa parliamentary constituencies that the decision has given sleepless nights to opposition parties which, he said, were spreading lies and rumours.

"If our decision lacked strength, they (opposition parties) would not have had sleepless nights. Now they are spreading lies and rumours," PM Modi said, adding that the "historic" decision was taken in national interest.

"Our government believes in `sabka sath, sabka vikas`. For the first time, such a decision was taken. They (opposition parties) did nothing for social justice, and when we did, they were caught sleeping. The Bill was passed (in Parliament) in just 48 hours," he said.

He asserted that the decision was taken by rising above political lines, saying it was not possible without an amendment in the Constitution.

"The existing reservation for SCs/STs and OBCs will not be disturbed. We are increasing 10 percent seats in educational institutions. This will open new doors of opportunities. A major section of the society will get justice," he said, urging the party cadre to counter aggressively the opposition`s charge.

The Prime Minister also rejected the allegation that the decision was politically motivated and was taken in view of the Lok Sabha polls.