Bengaluru Police has named five people in the FIR as those who led a mob of around 800 people who went on rampage in Bengaluru's Pulakeshi Nagar on Tuesday night and vandalized two police stations and the residence of Congress MLA Akhand Srinivas Murthy whose nephew allegedly shared an insulting Facebook post against Prophet Mohammad. 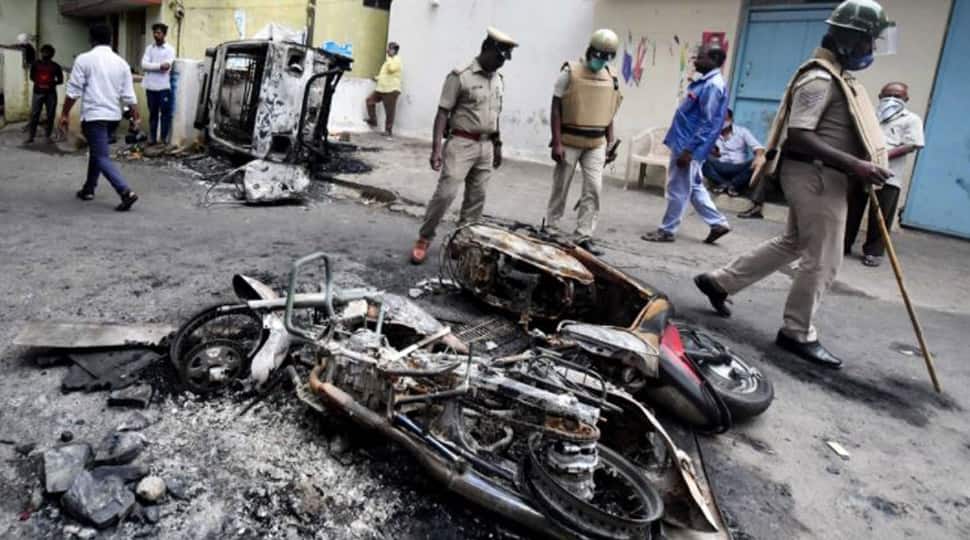 Bengaluru Police has named five people in the FIR for leading a mob of around 800 people who went on rampage in Bengaluru's Pulakeshi Nagar on Tuesday night and vandalized two police stations and the residence of Congress MLA Akhand Srinivas Murthy whose nephew allegedly shared an insulting Facebook post against Prophet Mohammad.

The FIR mentioned that the mob was armed with weapons and came with an aim to vandalise the police station and kill cops. Slogans of ‘hack cops to death’ were allegedly raised by the angry mobs as they marched on the roads with machetes, stones and rods.

The angry mobs expressed their anger over cops not handing over MLA's nephew Naveen to them as they wanted to kill him for sharing the derogatory message against Prophet Mohammad.

Police has also registered FIR against Naveen under IPC Sec 153A for promoting enmity between different groups on grounds of religion, race, place of birth, residence, language, etc., and doing acts prejudicial to maintenance of harmony and IPC 295A for deliberate and malicious acts, intended to outrage religious feelings of any class by insulting its religion or religious beliefs.

Three people were killed after the police opened fire on the rioters to bring situation under control on Tuesday. Several, including 60 cops, were injured in the violence which resulted in the damage of many vehicles too. The violence is stated to have been incited by SDPI, the political arm of the Islamic fundamentalist organization PFI. SDPI's local leader has been arrested for his involvement in the violence.

Eyewitnesses said that the mob attacked at least five times and the number of people attacking each time was increasing. A large number people perpetrating the violence were from outside the area. People opined that people outside were called to attack the MLA's house and the police stations to hide their identity. The police have so far arrested 150 rioters including the Social Democratic Party of India's local leader Muzammil Pasha.

Bengaluru Commissioner of Police Kamal Pant said on Wednesday (August 12) that the imposition of Section 144 in areas under DJ Halli and KG Halli police station limits has been extended till 6 am on August 15. Section 144 does not allow the gathering of four or more people at a place. Earlier on Wednesday, Karnataka Home Minister Basavaraj Bommai had said that an inquiry into Tuesday's violence in Bengaluru will be done by a district magistrate.