7 children among 13 dead in Bhiwandi building collapse; owner on the run

Bhiwandi DCP Rajkumar Shinde said offences under sections 337, 338, 304 (2)of the IPC were registered against the owner of building Syyed Ahmed Jilani. 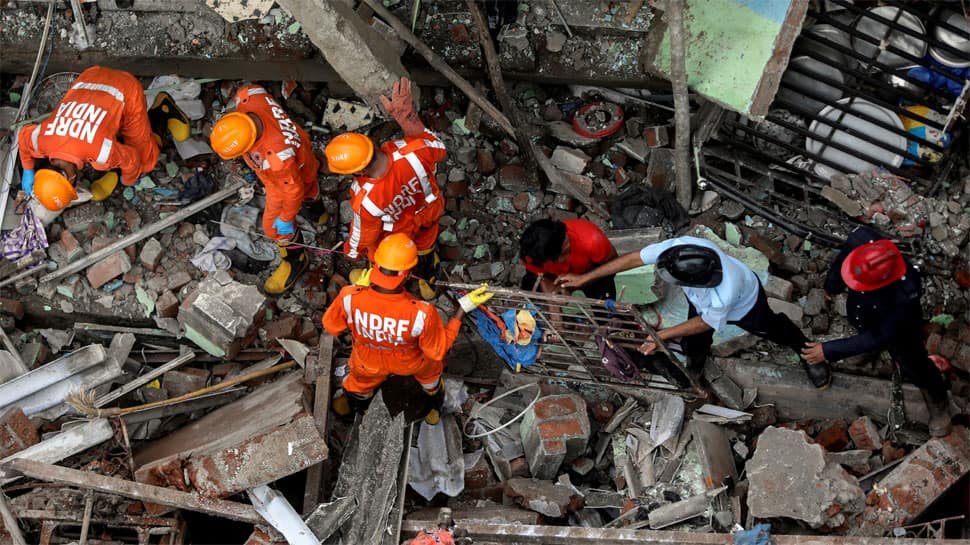 MUMABI: Thirteen persons, including seven children were killed and 20 others, including a four-year-old boy, were rescued after a three-storeyed building collapsed in Maharashtra's Bhiwandi town on Monday (September 21).

Bhiwandi DCP Rajkumar Shinde said offences under sections 337,338,304 (2)of the IPC were registered against the owner of building Syyed Ahmed Jilani following a complaint by the civic officials after the collapse. The police officer ruled out any possibility of finding more people/bodies in the debris. Jilani is said to be on the run following the collapse of the structure.

The 43-year-old Jhilani building caved in at 3.40 am, police said, adding a two-year-old boy is among the dead. Two civic officials have been suspended in connection with the collapse and an offence has been registered against the building owner, an official said.

The building at Bhiwandi, a powerloom town around 10 km from Thane, had 40 flats and around 150 persons lived there, an official said.

Teams of the National Disaster Response Force (NDRF) are at the spot. NDRF DG S N Pradhan said they used a canine squad to search persons trapped in the debris. A portion of the building collapsed and many occupants were trapped in the debris, a Thane Municipal Corporation official said.

The building was not in the list of dilapidated structures of the Bhiwandi-Nizampur Municipal Corporation (BNMC), he said.

The power supply to the locality was snapped as a precautionary measure, the official said, adding the injured have been admitted to local hospitals.

The BNMC has suspended two senior officials in connection with the building collapse. An official release said the then Assistant Municipal Commissioner Sudam Jadhav and an engineer and Verification Officer Dudhnath Yadav have been suspended.

An inquiry committee has also been set up and will include the assistant town planner, the release said.

Prime Minister Narendra Modi expressed anguish at the loss of lives in the building collapse. "Saddened by the building collapse in Bhiwandi, Maharashtra. Condolences to the bereaved families. Praying for a quick recovery of those injured. Rescue operations are underway and all possible assistance is being provided to the affected," Modi tweeted.

Maharashtra Chief Minister Uddhav Thackeray expressed pain over the collapse and instructed the administration to ensure proper rescue operation and treatment to the injured, his office said.