NSA Ajit Doval on Saturday visited Anantnag and interacted with locals to assess the ground situation there. 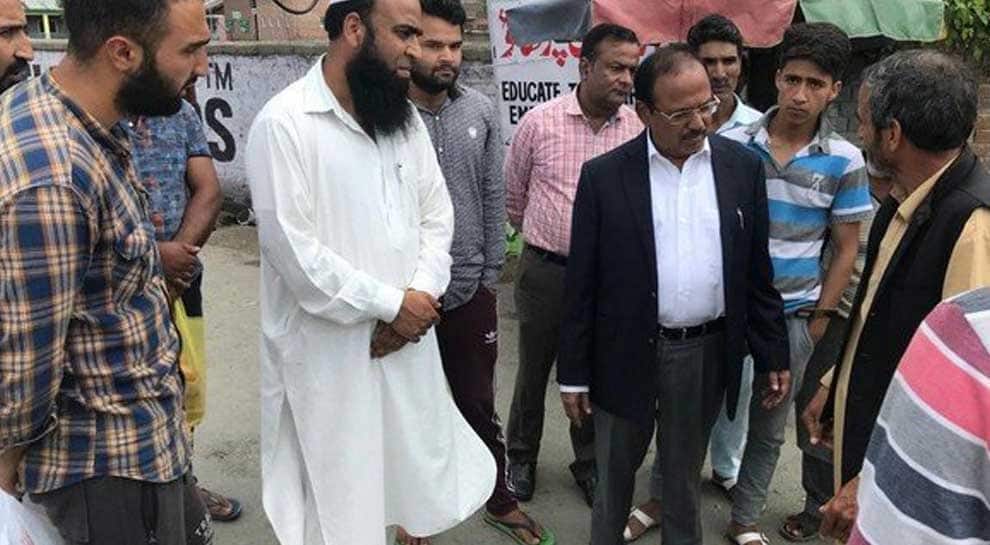 NSA Doval's visit to J&K's Anantnag town holds significance as it is considered to be the hotbed of several Pakistan-backed terrorists.

Several terrorists have been killed in encounters by the security forces in the town in recent times.

A video of NSA interacting with locals and roaming on the streets feely has surfaced on the social media platforms. In the video, the NSA can be seen interactig with local traders, mingling with children, 'maulvis,' workers and passersby.

At one point in the video, Doval is seen mingling with shepherds at a 'mandi' in Anantnag.

Someone is heard asking one of the shepherds if he knows who is he interacting with. The man replies in negative.

To which, Doval says, "That is not a problem (Nahi, Wo Koi Baat Nahi)."

In another video, the NSA is heard asking locals if they are facing any problems. The locals are then seen complaining about lack of network connectivity, saying that they are not able to talk to anyone.

The NSA can also be seen cuddling a kid and asking whether he was happy at schools being closed.

The video of NSA Doval's Anantnag visit surfaced even as the Kashmir Valley was slowly limping back to normalcy with the town witnessing normal traffic as people thronged ATMs to collect cash for the upcoming festival.

#WATCH SRINAGAR: People queue up outside an ATM. #JammuAndKashmir pic.twitter.com/TtlQPEtSk1

Autos and cars were seen plying on the roads and several of the shops remained open.

Doval has been camping in Kashmir ever since the Central government announced its decision to scrap Article 370.

He is reviewing the ground situation by interacting with locals in most sensitive areas of Kashmir.

On Tuesday, after holding several meeting with local officials, the NSA had found that locals were supportive of the decision and felt that the change was well planned, sources said.

The NSA in the past few days has visited several parts of the valley interacting with locals to assess the situation on the ground.

Doval had visited downtown Srinagar on Friday where he spent two hours talking to locals.

On August 7, the NSA had visited Shopian where he met locals assuring them that their welfare was the government`s prime concern.

In Shopian, Doval also met CRPF personnel in the presence of Jammu Kashmir DGP Dilbagh Singh, where he lauded them for their professionalism.