Restoring democracy and eliminating terrorism from Jammu and Kashmir are the top priorities of the government, Home Minister Amit Shah said on Friday in the Lok Sabha. 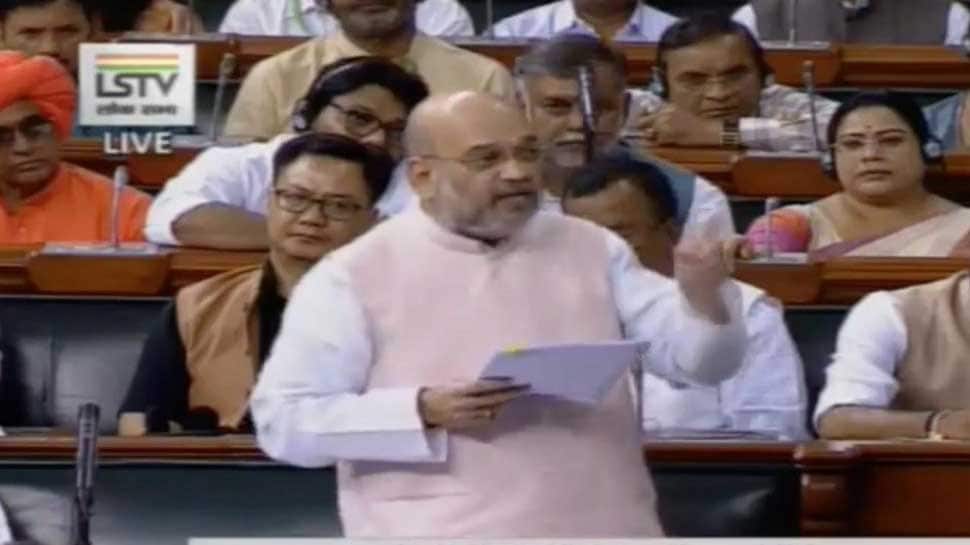 NEW DELHI: Union Home Minister Amit Shah on Friday made a scathing attack on the Congress party and said that the policies of its tallest leader and country's first prime minister Jawahar Lal Nehru were mainly responsible for all that ails Jammu and Kashmir.

Speaking in Lok Sabha, Amit Shah said, ''We are facing the scourge of terror because of the mistakes that were made by Congress and Jawahar Lal Nehru.''

Shah continued to say, ''Who called for ceasefire back then? It was Jawaharlal Nehru who did it and gave that portion (PoK) to Pakistan. You say we don't take people into confidence, but Nehru Ji did it without taking the then Home Minister Sardar Patel into confidence.''

The Home Minister also blamed the Congress party for Partition. Calling it a 'historic mistake' of the Nehru government, Shah said that the first PM of India did not even take Sardar Patel, his deputy PM, in confidence while dealing with the Jammu and Kashmir issue.

'The Home Minister also held the party responsible for imposing the President's Rule for a maximum number of times in J&K.

''They are saying we are trampling democracy in J&K. Before this time, till now 132 times, article 356 has been imposed (President's Rule), out of which 93 times Congress has done it. Now, these people will teach us democracy?'' Shah said.

Amit Shah said that restoring democracy and eliminating terrorism from Jammu and Kashmir are the top priorities of the Modi government.

"I want to state this clearly that restoring democracy is the top priority of the BJP-led government" and the government is serious about this, he said.

He added, "We are committed to eliminating terrorism from its root in the state". He said that given the current situation of the state, it is fundamental to extend the President's rule.

The Government earlier moved a statutory resolution in the Lok Sabha to extend the President’s rule under Article 356 in Jammu and Kashmir for six more months, from July 3, 2019. Shah stated that the President’s rule is important to maintain law and order in the state.

This was the first proposal Shah moved in the Lok Sabha after being appointed as the Home Minister in the second tenure of the Narendra Modi government. While tabling the resolution, Shah said the elections in the state cannot take place now, one reason being the upcoming Amarnath Yatra.

“It is not possible to hold elections in Jammu and Kashmir now. The Election Commission has decided to conduct the elections by the year-end. For the past several decades, the elections have not taken place in the state during these months,” Shah asserted.

Furthermore, he said that during the Governor’s Rule and later President’s Rule, the government has hit at the roots of terrorism. The state has seen bloodshed in previous elections, but things have changed, he told the House.

He added, ''We are monitoring the situation in Jammu & Kashmir. Construction of bunkers in border areas will be done within the time limit set by the previous home minister Rajnath Singh Ji. Life of every individual is important to us.”

Besides, the Home Minister also introduced J&K Reservation Bill in Lok Sabha. He said, “This bill is not to please anyone but for those living near the International Border.”

The Union Cabinet under the chairmanship of Prime Minister Narendra Modi had earlier cleared the decks for approval of the Jammu and Kashmir Reservation (Amendment) Bill, 2019. It was also approved by President Ram Nath Kovind.