The suspected IED was kept near Kallar chowk at the Jammu-Rajouri highway. Forces had closed the road after detecting the object. 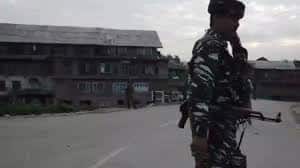 The suspected IED was kept near Kallar chowk at the Jammu-Rajouri highway. Forces had closed the road after detecting the object.

On Monday, the Road Opening Party (ROP) of an army unit was on morning patrol on NH-144A that connects Jammu with Rajouri and Poonch districts. During patrolling, army jawans of ROP saw something suspicious lying alongside the highway near Kallar chowk and during close examination, a bottle filled with liquid material and a polybag filled with some solid material was found.

The ROP flashed an alert and soon, a team of police headed by in charge Police Post Chingus Chatyar, SI MD Khan, reached the spot and enforced the closure of traffic on a particular stretch.

The bomb disposal squad launched its operation following SOP and after an hour-long exercise, the suspected IED was destroyed on the spot.

He added that investigation into the matter has been started with Deputy SP Hqrs Govind Rattan personally conducting an investigation.