“Situation is really serious in some parts of the state. We will do everything possible to save lives. We have sought the army, navy and air force help. Relief camps have been set up in affected districts,” Kerala CM Pinarayi Vijayan said. 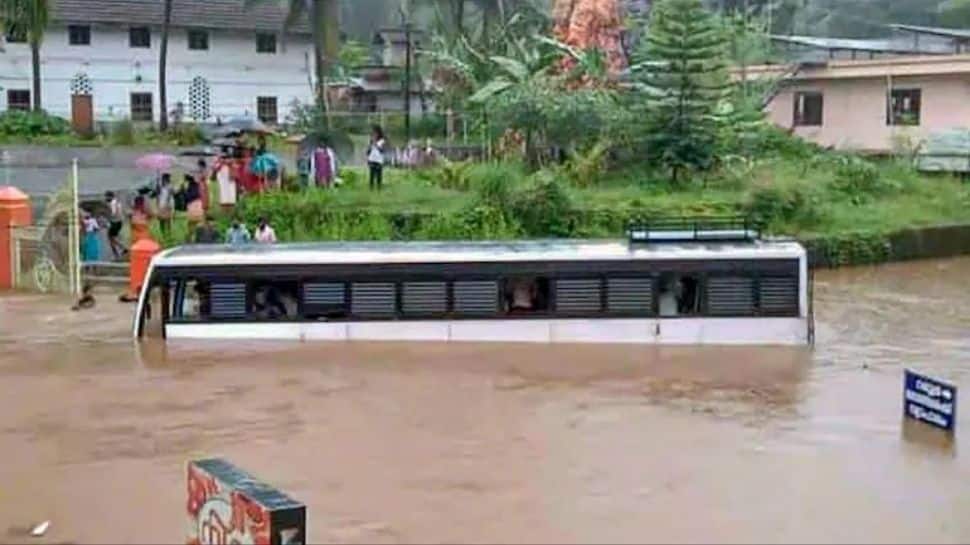 New Delhi: At least six people died and a dozen were missing on Saturday (October 16, 2021) as heavy rains lashed Kerala, prompting the state government to seek the assistance of the defence forces for rescue operations. The incessant rainfall in the state has caused flash floods and landslides in many parts.

Numerous people have been injured and displaced in rain-related incidents in the southern state where dams in many districts are nearing its full capacity and small towns and villages in the hilly areas are totally cut off from the outside world.

"The situation is serious", Chief Minister Pinarayi Vijayan said. He, however, said the latest weather forecast indicates that the situation is not going to get worse.

Many hilly areas of Kottayam, Idukki and Pathanamthitta are experiencing almost similar to that of the situation the state faced during the time of devastating floods of 2018 and 2019 but authorities said everything was under control and there was no need for any panic.

However, the rescue teams of the state police and fire force could not reach the affected areas due to floods and adverse weather conditions prevailing there.

This lead to the officials calling personnel of the Army, Airforce and the Navy. An official said that the teams are on the way to Koottickal and Peruvanthanam, the two hilly villages falling under Kottayam and Idukki districts respectively, where an overflowing river swept through houses, displacing and isolating many.

State Cooperation Minister V N Vasavan, who reached the neighbourhood of these landslide-hit villages, said bodies of two women and a child who died, were recovered while search was on to recover the body of a man who also lost his life in the incident.

He said at least 12 people are missing from these villages.

In a separate rain-related incident, a man and a woman--both 30-years-old-- died as their car was swept away in the floodwaters in Kanjar in Idukki district, police said. Their bodies have been recovered, they said.

According to a defence spokesperson, Mi-17 and Sarang Helicopters are already in standby mode to meet the requirements but they could not start operations as the weather at Kottayam is still bad. Air Force assets are still at Sulur in a standby mode, she said.

"All the bases under Southern Air Command have been put on high alert in view of the prevalent weather situation at Kerala," the spokesperson said in a statement.

"The Indian Army has already deployed army personnel to the flood-affected areas. One column consisting of One Officer, 2 JCOs and 30 other ranks of army personnel already moved to Kanjirappally, Kottayam District from Pangode Military Station...," she said.

The Southern Naval Command of the Indian Navy said it is fully ready for assisting local administration in rescue operations.

"Diving and Rescue teams are ready to be deployed at short notice. Helicopters stand-by to be launched once weather is conducive for Air Ops,", it said in a tweet.

Earlier, Minister for Cooperation and Registration V N Vasavan said at least three houses have been washed away in Kottayam district and some people feared missing.

"At least four landslips have been reported from various parts of Kottayam district. We have sought the assistance of the Airforce to rescue people who are stranded in the Koottickal area. We have received information about some people missing and over 60 waiting to be rescued as water entered their homes," the Minister told PTI.

According to the latest update of the India Meteorological Department, 'Red Alert' was sounded for six districts--Pathanamthitta, Kottayam, Ernakulam, Idukki, Thrissur and Palakkad districts.

Kottayam and Pathanamthitta are the most affected districts as of now due to heavy rains since Friday night.

Visuals have emerged on social media from various parts of Kottayam district, including a KSRTC bus stuck in floodwater and locals rescuing passengers from it.

Chief Minister Pinarayi Vijayan chaired a high-level meeting in the evening to review the rain situation and decided to strengthen rescue operations in all affected areas.

In a statement, the Chief Minister said all government agencies have been directed to take necessary steps to rescue people from the affected regions and evacuate those living in areas prone to landslides and floods. Vijayan also directed the district collectors to open relief camps to relocate the affected people.

He said the camps should function strictly adhering to COVID-19 protocol.

In the wake of the warning that the rains would continue till October 19, the meeting also decided not to allow pilgrims to trek to the Sabarimala Ayyappa temple, situated in a dense forest in Pathanamthitta district, till October 18. The temple was opened at 5 pm today for 'Thula Masam poojas.

Higher educational institutions, which were scheduled to open on October 18, will start on October 20, the statement said.

Appealing to the people of the state to keep extra vigil in the next 24 hours, the CM said in a Facebook post that the rains have already hit the south and central districts and it would intensify in the northern districts also by the evening as per the weather forecast.

The water level in some rivers is expected to rise and shutters of certain dams are likely to be opened, he said, adding that those living in its catchment areas should be ready to follow the instructions of authorities.

The CM also said a Red alert has been sounded for the dams under KSEB, including the Kakki dam in Pathanamthitta, Sholayar in Thrissur, Kundala and Kallarkutti in Idukki.

Meanwhile, two children had a miraculous escape after a portion of the wall of their house collapsed in incessant rains on Friday night at Chempakamangalam in the capital district where rains have been battering the city and rural areas alike since last night.

The wall collapsed on the bed, where the children were asleep, but they escaped with minor injuries, family sources said.

Government authorities have advised people against visiting tourist places and going near rivers and other water bodies in view of heavy rains in Thiruvananthapuram.

The Thrissur district administration urged people living in low-lying and other disaster-prone areas and on the banks of rivers to move to safer places.

Fishing boats have been prohibited from venturing into the sea, they added.

A red alert has also been issued for the Chulliyar dam in Palakkad and Peechi dam in Thrissur, which are under the irrigation department.