In a nation-wide call against the two farm bills passed by the Centre in the Rajya Sabha on Friday (September 25), as many as two dozen farmer organisations have come together. 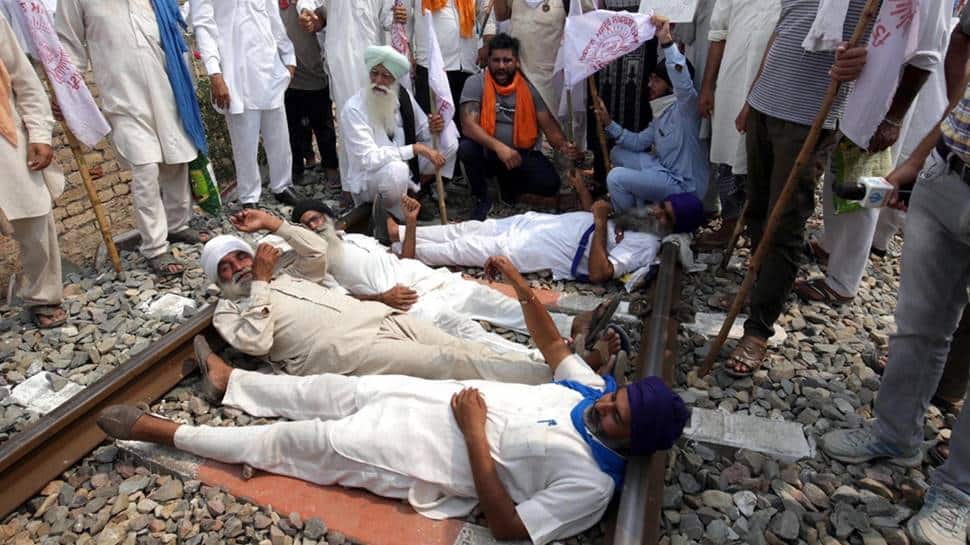 New Delhi: In a nation-wide call against the two farm bills passed by the Centre in the Rajya Sabha on Friday (September 25), as many as two dozen farmer organisations, including Bharatiya Kisan Union (BKU), All India Farmers Union (AIFU), All India Kisan Sangharsh Coordination Committee (AIKSCC), and All India Kisan Mahasangh (AIKM), have come together.

Over 30 farmer organisations in both Punjab and Haryana are already protesting and they want to convey their concerns to the government on Friday through the bandh call, reports say.

The farmers have also received support from 18 political parties including the Congress which has governments in four states, TMC in West Bengal, Left in Kerala, AAP in Delhi, TRS in Telangana.

The railways on Thursday said the 'rail roko' agitation in Punjab over farm bills will severely impact loading of foodgrains and other essential goods as well as movement of passengers travelling on special trains, mostly on an urgent basis.

Railway authorities said 14 pairs of special trains will remain suspended from September 24 till 26. A Railways spokesperson in New Delhi said the agitation will severely impact loading of foodgrain and other essential goods.

"The disruption of rail services at this time will have a serious impact on freight loading as well as passengers movement. It will affect movement of essential goods.. Also, this is a time when people are travelling for emergency purposes and this will hurt them too as we have had to cancel/divert special trains," general manager, Northern and North Central Railway Rajiv Chaudhry told PTI.

While on Thursday, several trains in Punjba and Haryana were suspended as farmers began a three-day `rail roko` campaign. The Ferozepur Railway division decided to suspend the operation of special trains till September 26 in view of the safety of passengers, a rail official told IANS.

While several farmers' groups said they will hold a "chakka jam" from 10 am to 4 pm on Friday. Though many of the protesters have said that they will protest in their own areas and not aim to head to Delhi, but Delhi Police has been put on high alert. Preparations have been made to seal the Haryana border in a bid to forestall any attempt.

BKU's Haryana President, Ratan Singh Mann, said: "Various farmers' organisations of Haryana will hold protests in all districts, tehsil, block and village levels against the farm bills passed by the Parliament. There will be a 'chakka jam' from 10am to 4pm.

Mann also said that like Haryana, there will be protests in Punjab, Himachal Pradesh, Jammu, Uttarakhand, Uttar Pradesh and other states.

On September 20, the Rajya Sabha passed the Farmers` Produce Trade and Commerce (Promotion and Facilitation) Bill, 2020, and The Farmers (Empowerment and Protection) Agreement on Price Assurance and Farm Services Bill.

The Centre, states that these bills will help small and marginal farms by allowing them to sell produce outside mandis and sign agreements with agri-business firms; and doing away with stock-holding limits on key commodities.

While the farmers` unions have reportedly stated that the problem with the Bills goes beyond MSP to the whole issue of phasing out the `mandis`. The farmers are far more vulnerable to exploitation outside the `mandi` system and they are producers, not agri-businesses, the unions have said.