The new coalition named Progressive Democratic Alliance (PDA) also includes the Bahujan Mukti Party (BMP) and Social Democratic Party of India (SDPI) of MK Faizi to fight against the NDA and other fronts in the upcoming Bihar Assembly polls. 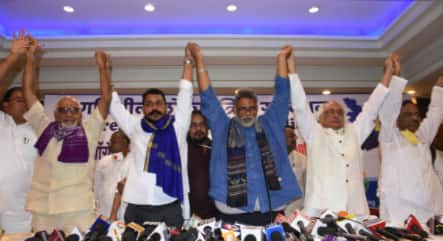 The new coalition named Progressive Democratic Alliance (PDA) also includes the Bahujan Mukti Party (BMP) and Social Democratic Party of India (SDPI) of MK Faizi to fight against the NDA and other fronts in the upcoming Bihar Assembly polls.

Addressing media in Patna, the national president of the Jan Adhikar Party, Pappu Yadav, said that Upendra Kushwaha's RLSP, the LJP, and Congress have been invited to join this alliance in the larger interest of the state.

Slamming Bihar Chief Minister Nitish Kumar of not doing enough to fight the coronavirus pandemic, he said the alliance has been formed put an end to 30-year misrule.

He also blamed Nitish Kumar for failing utterly to extend assistance to helpless Bihari residents in Gujarat and Delhi during the outbreak of the COVID-19 pandemic.

When asked if his effort to form an alliance is aimed at emerging a kingmaker after the polls, Yadav said he just wants to serve Bihar.

Chandrashekhar Azad said, "We will always be available at places where a fight for justice is going on."

Last week, Asaduddin Owaisi had also forged an alliance with the Samajwadi Janata Dal (SJD) and announced to field the alliance candidates on seats in Seemanchal and other parts of Bihar.

The Election Commission had earlier announced that Bihar assembly elections will be held in three phases: October 28, and November 3 and 7, while the counting of votes will take place on November 10.

After the polls, a rift emerged between JDU and the RJD in 2017, and Chief Minister Nitish Kumar snapped ties with RJD and rejoined the BJP-led NDA to retain power in Bihar.