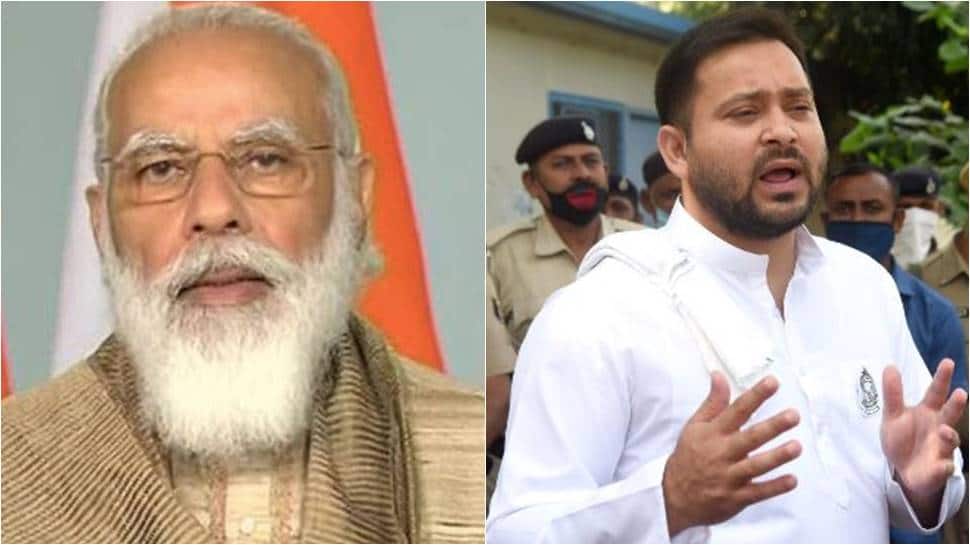 Muzaffarpur: In a scathing attack on the opposition RJD party and Tejashwi Yadav, Prime Minister Narendra Modi in his rally in Bihar's Muzaffarpur on Wednesday told voters to beware of the "yuvraaj" (crown prince) of "jungle raj".

Addressing his crowd at the second rally of the day, PM Modi cautioned the people that a return of the "jungle raj" will bring a double whammy for the state as it struggled with the outbreak of COVID-19. He alleged that RJD had the "copyright over kidnappings".

Further, the PM appealed that to the voters to take the assembly elections as "an opportunity to re-elect those who pulled Bihar out of darkness".

"Can anything be expected from the yuvraaj of jungle raj? He ought to be evaluated on the basis of a track record about which the people know much better than I do," said Modi, in a veiled referrence to RJD and Tejashwi Yadav, CM candidate of the Grand alliance.

In reference to Yadav's poll promise of providing 10 lakh jobs if his party was voted to power, PM Modi said, "Forget about jobs in the public sector. Even private companies giving jobs will flee."

"Companies will shut down their offices and run away. Extortion calls will be made by those patronised by the party which has a copyright over kidnappings," he said.

"The elections are an opportunity to re-elect those who pulled Bihar out of darkness. The Centre has many plans for Bihar which will bring more peace and prosperity with Nitish Kumar at the helm in the state," the prime minister said.

The Bihar elections will be held in three phases with the first of the three-phase polling to be held on October 28. The polling for the second and the third phase will be conducted on November 3 and 7. Counting of all votes will take place on November 10.