According to the seat-sharing agreement that has been agreed upon by the alliance partners ahead of the three-phase election starting on October 28, the RJD will contest on 144 seats, while the Congress will contest from 70 seats. 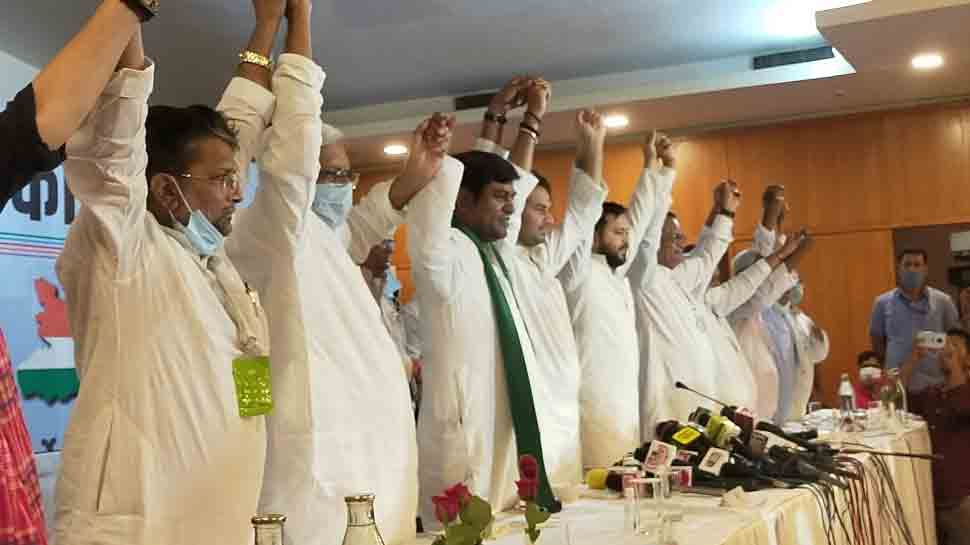 PATNA: Rashtriya Janata Dal (RJD) leader Tejashwi Yadav has been backed as the face of the multi-party coalition and unanimously chosen as the Chief Ministerial candidate of the opposition alliance in Bihar Assembly Election 2020, the Congress announced on Saturday (October 3).

According to the seat-sharing agreement that has been agreed upon by the alliance partners ahead of the three-phase election starting on October 28, the RJD will contest on 144 seats, while the Congress will contest from 70 seats. Notably, the 70 seats which Congress have been given is nearly twice as many as it had contested in the 2015 assembly polls in alliance with the RJD and Chief Minister Nitish Kumar's JD(U).

The Congress will also be fielding its candidate in Valmiki Nagar Lok Sabha seat where by-poll will be held on November 07. The Left parties will be contesting in 29 seats. While the CPI(ML) has been given 19 seats, CPI has got 6 and CPI(M) 4.

Announcing the seat-sharing formula in presence of leaders of Congress, CPI(ML), CPI and CPI(M), Tejashwi said his party will accommodate old alliance partner Vikashheel Insaan Party (VIP) and JMM its ally in adjoining Jharkhand from its quota of 144 seats in the 243-strong assembly.

Tejashwi vowed to dislodge the government headed by Nitish Kumar, whom Congress leader Avinash Pandey in his address accused of hijacking of the mandate in the previous elections.

"All components of United Progressive Alliance (UPA) have decided to come together as coalition for the Bihar Assembly elections. Congress, RJD, CPI, CPM and Vikassheel Insaan party will be part of this alliance under leadership of RJD. We want Bihar to prosper under Tejashwi Yadav," Pandey said, as reported by ANI.

The JD(U) chief had fought 2015 elections opposing the BJP led by Prime Minister Narendra Modi but ended up re-aligning with the saffron party, Pandey said.

The second and the third phase of the election will be held on November 3 and 7. Out of 243 constituencies, 71 will go to the polls in the first phase, nomination filing for which is going on between October 1 and October 8.

The disjointed formation, however, continued to be in disarray as VIP president Mukesh Sahni a Bollywood set designer-turned-politician announced soon after the press conference that he was quitting the grand alliance since he did not get 'a respectable offer'. "What is happening with us right now is somewhere backstabbing. I am going out of this alliance and will address media on Sunday," said Mukesh Sahni, Vikassheel Insaan Party.