Bihar Assembly polls: We're interested only in work, not in our self-promotion, says CM Nitish Kumar

Chief Minister Nitish Kumar said, "Those who don't have any knowledge or experience, are speaking against me at behest of their advisors." 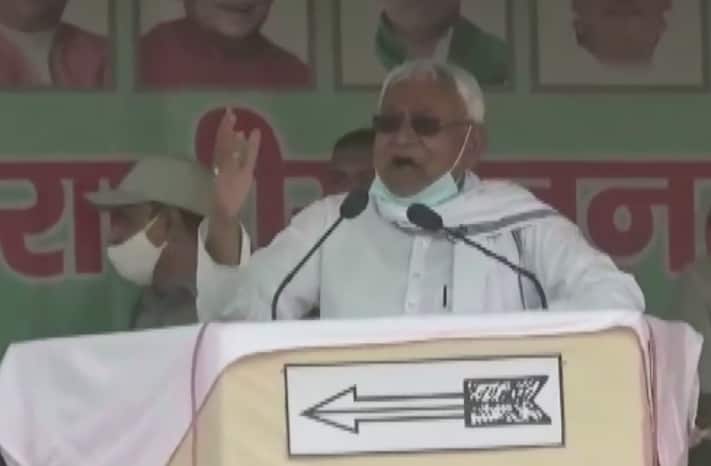 New Delhi: Chief Minister Nitish Kumar on Monday (October 26) said that crime in Bihar has reduced as the state is now at number 23 ranking drawing people's attention towards better law and order situation under his governance while addressing a public rally at Sakra Vidhan constituency in Muzzafarpur.

The Chief Minister said, "crime has reduced in Bihar as state is now at number 23 ranking, according to govt data. We're interested only in work, not in our self-promotion."

Nitish Kumar further said, "Those who don't have any knowledge or experience, are speaking against me at behest of their advisors. We're not interested in campaign, we're concerned about nepotism. We consider whole Bihar as one family but for few, only blood relatives are their family."

Rashtriya Janata Dal (RJD) leader Tejashwi Yadav today said that besides unemployment, inflation is the biggest issue in Bihar Assembly Elections as onion prices are skyrocketing. He also alleged that 60 scams to the tune of about Rs 30,000 crore have taken place in the state under the leadership of Nitish Kumar.

Speaking to media, he said, "Inflation is the biggest issue. BJP people used to wear a garland of onions. Now it is about to touch Rs 100/kg. Those who were speaking about onion when it touched Rs 50-60/kg are now silent when it has crossed Rs 80/kg. Starvation and poverty are rising in the state."

"There is unemployment, small traders are destroyed. GDP is falling, we are going through an economic crisis. Farmers are being destroyed, youth is unemployed, Bihar is poor and people are migrating for education, jobs and medical help," he added.

After promising 10 lakh jobs in the state for the youth, Tejashwi has brought rising inflation as a key issue in the ongoing Bihar election campaign.

The Mahagathbandhan`s Chief Ministerial face, Tejashwi Yadav alleged that misappropriation to the tune of about Rs 30,000 crore has been done in 60 scams under Nitish Kumar`s leadership.