No injuries have been reported in this incident so far, but the collapse of the bridge, constructed at a cost of Rs 263.48 crore, just 29 days after it was inaugurated has shocked people in the region. 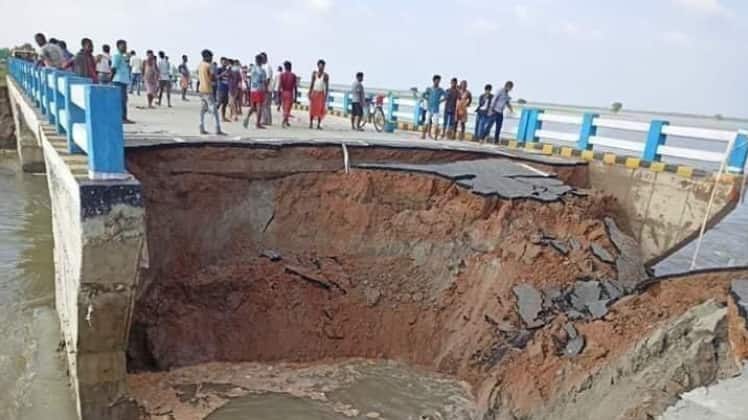 New Delhi: Bihar Chief Minister Nitish Kumar on Thursday (July 16) faced severe criticism of opposition leaders as a portion of a new bridge connecting Gopalganj and East Champaran collapsed on Wednesday after heavy rainfall. The Sattarghat bridge on Gandak River in Gopalganj district was inaugurated by the Chief Minister on June 16.

No injuries have been reported in this incident so far, but the collapse of the bridge, constructed at a cost of Rs 263.48 crore, just 29 days after it was inaugurated has shocked people in the region.

Tejashwi Yadav took to social media and tweeted in Hindi as, "The Sattarghat bridge of Gopalganj built at a cost of Rs 263.47 crore in 8 years, was inaugurated by Nitish Ji on June 16. The bridge today collapsed after 29 days. Beware! If someone terms it corruption by Nitish ji. Rs 263 crore is for just a glimpse. Even their rats consume alcohol worth this amount."

Bihar Congress chief Dr Madan Mohan Jha also tweeted in Hindi: "The inauguration of the bridge constructed at a cost of Rs 263.47 crore on June 16 and its destruction on July 15. Now do not accuse the poor rat for this."

LJP MP Chirag Pawan demanded a probe into the bridge collapse incident and sought strict action against the culprits.

The 1.4 km Sattarghat Mahasetu bridge on Gandak River was thrown open to commuters on June 16, eight years after work on it started in April 2012. The bridge was built by the Bihar Rajya Pul Nirman Nigam Ltd.

The culvert connecting the approach road to the bridge was reportedly unable to withstand the pressure of the rising river and was washed away after water was released from Valmiki Nagar.

The culvert had already been eroding after rains in the region over the last couple of days. The bridge collapse has caused severe traffic disruption, with several areas being cut off as this was the only major link between Gopalganj and East Champaran.

Earlier in 2017, a minister in Nitish Kumar`s cabinet had blamed rats for making holes in the embankments weakening the structures and allowing river water breach through them, thereby causing floods in Bihar.

In another incident, the state had blamed rats for the seized bottles of liquor missing from police station stores.

Meanwhile, Heavy rains alerts have been advised across Bihar by the India Meteorological Department (IMD) over Bihar till July 19.