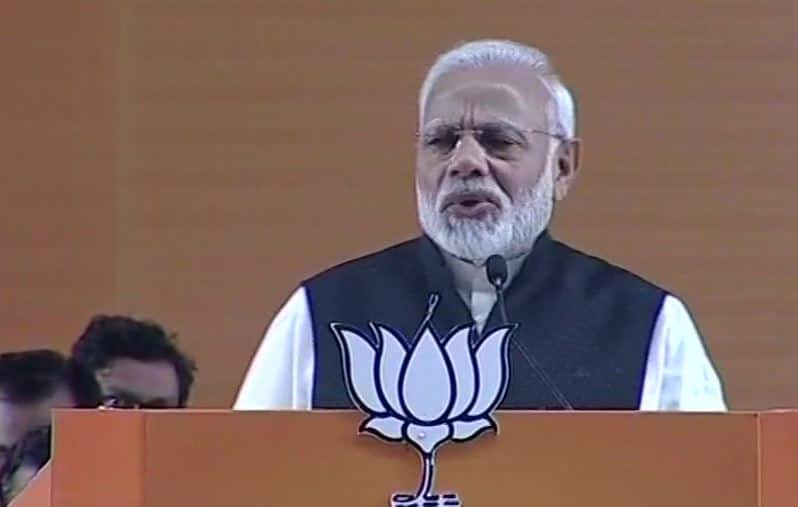 Sources claim that during Saturday's meeting, the BJP leaders will focus on strategy against opposition in order to secure a win in 2019 general elections. Prime Minister Narendra Modi will also deliver a valedictory speech.

# PM Modi concludes his speech by asking the party leaders and workers to take the vision of party forward.

# The Gandhis have no respect for law. They stand for dynasty, we stand for democracy, says PM Modi.

# Raking up the Ayodha issue, Prime Minister Modi says that Congress is using their lawyers to stall the issue.

PM Modi: Congress is trying to obstruct the Ayodhya case through its lawyers, Congress was even ready to impeach the CJI using false allegations, what kind of mentality does the Congress have which works against the country's interest on every issue? pic.twitter.com/ioD5Fma0dd

# PM Narendra Modi hits back at the Congress, saying: 'They can hurl as many insults as they want, but this chowkidar is not going to stop.'

# The prime minister referred to criticisms on changing names of schemes and institutions and asked: "I want to know how many schemes are in my name?" "We have not renamed anything. Does Ayushman Bharat scheme has my name? We have kept the nation above everything else."

PM Modi at BJP National Convention in Delhi: Important initiatives have been taken up in last 4 years for women empowerment. Ppl made fun of ' Beti Bachao, Beti Padhao' for political opposition, but we have come a long way to free society of wrong beliefs that existed for decades pic.twitter.com/QpOjuRuIAJ

# 'We have not touched the existing reservation system. This is an additional 10 per cent. You know, some people are trying to spread misinformation against this,' PM Modi says

# Talking on 10% quota for upper caste poor, PM Modi says, "This is not just reservation but an attempt to give a new dimension to the aspirations of youths, who are left behind. The provision of reservation done by Babasaheb Ambedkar is as strong today as it was then. And will continue to remain strong."

# PM Modi attacks the Congress and said that the previous governments pushed the nation into a well of darkness.

# "A party that ran from two rooms once upon a time, is today holding such a huge meeting of its leaders, this itself is an achievement," says PM Modi.

# UP CM Yogi Adityanath says that even if there is a mahagathbandhan or not, the BJP will perform better than 2014 in the upcoming Lok Sabha polls.

# UP govt has given houses to 18 lakh poor individuals: Yogi Adityanath

Uttar Pradesh CM Yogi Adityanath at BJP National Convention in Delhi: Within 1.5 yrs, UP govt has given houses to 18 lakh poor individuals, irrespective of their caste or religion, under Pradhan Mantri Awas Yojana. Under SP govt, only 63,000 houses were built in 5 years of rule. pic.twitter.com/YMwrjUCa2u

# Amidst thundering applauds, UP CM Yogi Adityanath to address the crowd

# Rahul has learnt to insult India from foreign soil: Prasad

# This election is not of UP, this is for India. People will look for a leader who will lead India: Prasad on SP-BSP alliance

# Only glue of alliance is hatred against Modi. We have appeared to Millenium voters to vote for Modi, Ravi Shankar Prasad says

# 2019 election is a choice between stability versus instability: Prasad

# We have not had one major terrorist attack in this country after 2014: Sitharaman

Defence Minister Nirmala Sitharaman at BJP National Convention in Delhi: We have not had one major terrorist attack in this country after 2014. This govt under the leadership of PM Modi has ensured one thing that there shall not be an opportunity for terrorists to disturb peace. pic.twitter.com/qWehbpZkFd

# Country can foresee a bright future only under leadership of PM: Defence Minister Nirmala Sitharaman

# Non-performance, corruption were the features of the previous govt: Nitin Gadkari Gadkari