Taking to Twitter, the BJP posted a video highlighting the arduous task involved in repeatedly explaining the Rafale pact to Congress president and other party leaders. 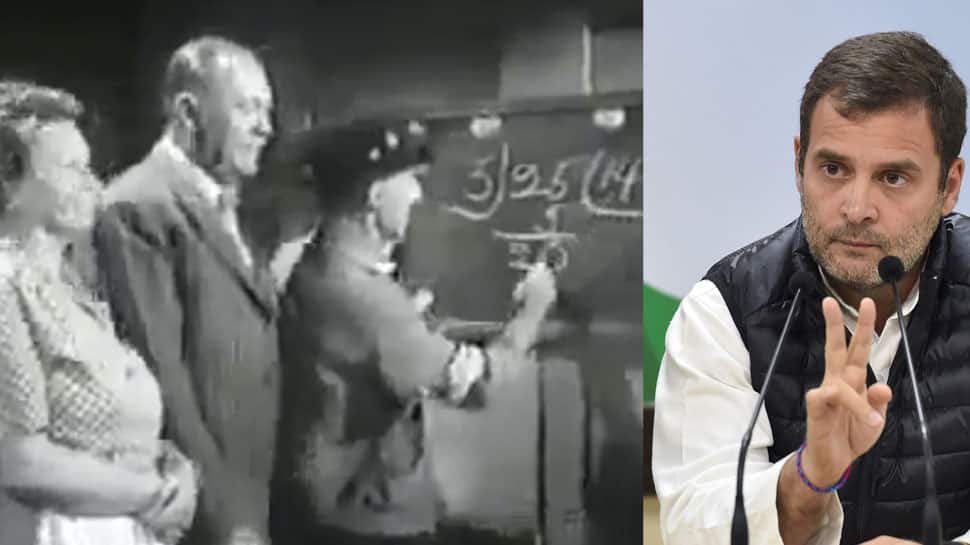 Hours after the Congress dismissed the CAG report on the multi-billion-dollar Rafale deal as a "cover-up", the BJP took a dig at the party asserting what an impossible job it was to explain the pact to them.

Taking to Twitter, the BJP posted a video highlighting the arduous task involved in repeatedly explaining the Rafale pact to Congress president and other party leaders. "This is how it is like explaining Rafale deal to Rahul Gandhi and his cronies," tweeted the BJP.

The video clip posted is from a 1949 movie, Ma & Pa Kettle, where Pa explains that 25 divided by 5 equals 14 and Ma multiplies 5x14 and gets 25. Their son tries to demonstrate otherwise.

This is how it is like explaining Rafale deal to Rahul Gandhi and his cronies. pic.twitter.com/7ani7fBtuq

The couple confidently keep on solving the mathematical problem in every wrong method possible. In the end they walk out with an air as if the man is wrong. After trying to make them understand the son at last throws away the chalk in exasperation and he too walks away.

On Wednesday, Rahul Gandhi and the BJP traded charges over the Rafale issue as the Congress chief claimed that a purported dissent note by some officials on the aircraft deal demolished Prime Minister Narendra Modi's claim of better pricing and faster delivery, while the ruling party cited the CAG report to assert that it had exposed his lies.

The BJP demanded that Gandhi withdraw his allegations against the Modi government and tender an apology in the light of the CAG report and an earlier Supreme Court order.

At a press conference, the Congress president dismissed the CAG report on the multi-billion-dollar pact as a "cover up" that was not worth the papers it was written on.

The CAG, in its report, had said the PM Modi government had secured a 2.86-per cent cheaper price for the Rafale fighter jets than what was negotiated by the previous UPA regime.

Stepping up his attack on the government within hours of the much-awaited Comptroller and Auditor General (CAG) report on the deal being tabled in Parliament, the Congress chief accused the Modi government of "lying".

Gandhi said even though he did not agree with the CAG's submission that the deal was 2.86-per cent cheaper than the UPA-era offer, but it "calls the bluff" of PM Modi, then finance minister Arun Jaitley and Defence Minister Nirmala Sitharaman, who "had lied to Parliament by stating that the price of the 'new deal' was 9-20 per cent lower".

Gandhi observed that Modi and his cabinet colleagues' argument on why the new deal was required was based on two pillars -- price and the fact that the air force needed the planes quickly -- and said the "dissent note" by some of the Rafale deal negotiating team members had "demolished" their contention.

According to Gandhi, the note said French firm Dassault Aviation would take at least 10 years to complete its present backlog of the Rafale aircraft. He also quoted the note as saying that the final price offered by the French government, which was escalation-based, was 55.6 per cent above the benchmark price.

"There is only one reason the new deal has been carried out and that is to give (industrialist) Anil Ambani Rs 30,000 crore," he said.

Severely critical of the CAG, he asked why the "dissent note" by the negotiating team officials was not part of the report. "As far as I am concerned, a CAG report that does not mention this document, that does not mention the dissent the negotiating team itself made on price, on timing, I do not think it is worth the paper (it is written on)," he said.

"The CAG report is a cover-up. It ignores the cost of the missing bank guarantee & glosses over the suspect costs for 'India Specific Enhancements'. But even the CAG couldn't hide that it may take upto 10 yrs. For the 36 RAFALE jets to be delivered!," Gandhi also tweeted later.