Thousand of people came out on Chennai's Wallajah Road on Wednesday (February 19) to protest against the Citizenship Amendment Act (CAA), National Register of Citizens (NRC) and National Population Register (NPR). 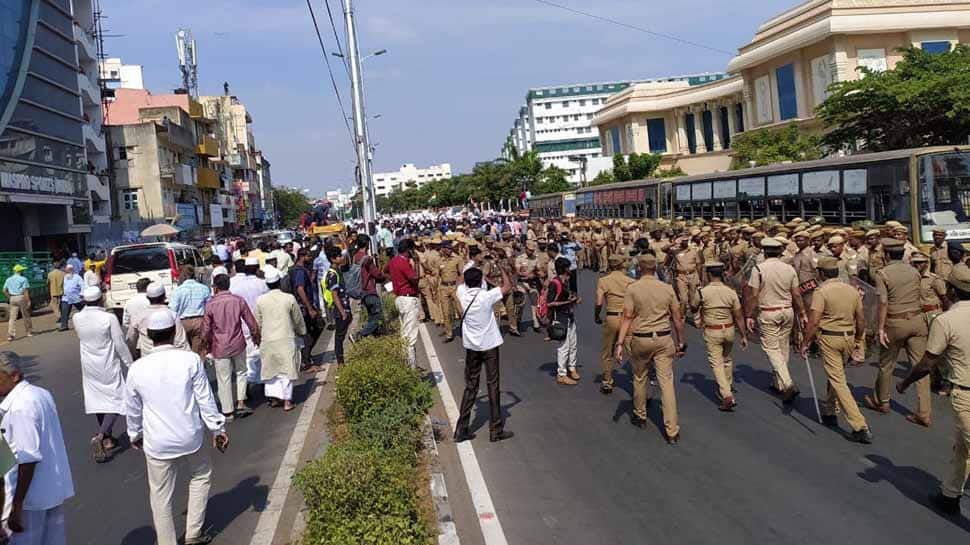 Thousand of people came out on Chennai's Wallajah Road on Wednesday (February 19) to protest against the Citizenship Amendment Act (CAA), National Register of Citizens (NRC) and National Population Register (NPR).

The protesters started their march just a day after the Madras High Court passed an order barring 'Muslim outfits' from going ahead with its march to lay siege to the Tamil Nadu assembly. The protesters are demanding for a House resolution against CAA, NRC and NPR.

Police presence has been beefed up near the State Secretariat to stop the protesters from reaching the Assembly building. Barricades are placed at several places on the road towards the Secretariat from Chepauk too.

On Tuesday, the interim injunction against anti-CAA protest till March 11 was granted by a bench of justices M Sathyanaraya and R Hemalatha. In its order, the court had restrained the Federation of Tamil Nadu Islamic and Political Organisations and its allied associations from holding the protets on Wednesday. During the hearing, the court also made it clear that it was not expressing any opinion on the CAA, NPR and the NRC.

Notably, anti-CAA protests are being witnessed in several parts of Tamil Nadu for the last two months, including the latest protest in Chennai's Old Washermanpet. The protest at Old Washermanpet started on February 14 and is called as "Chennai's Shaheen Bagh" in the social media.