The report also includes details of the Capital Acquisitions in the Indian Air Force. 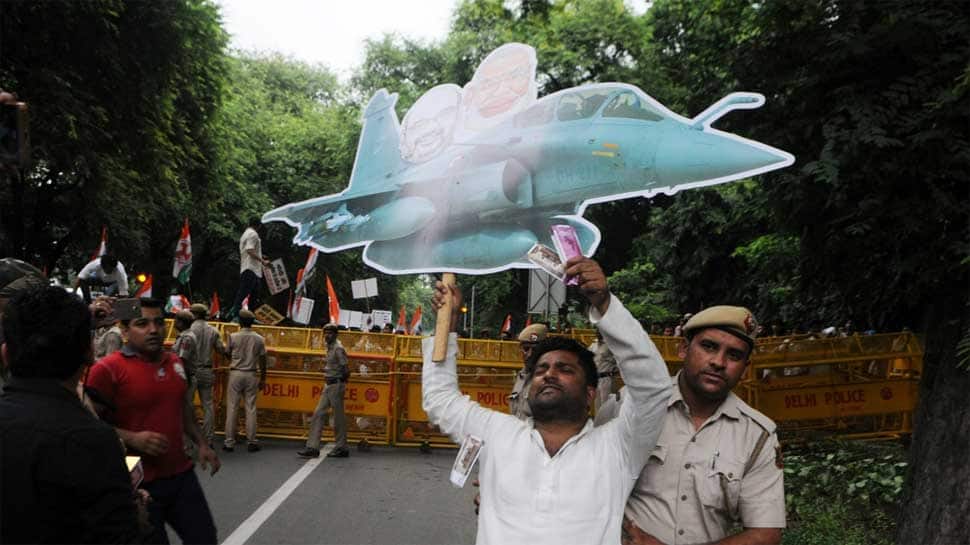 NEW DELHI: The Centre on Wednesday tabled the CAG report on Rafale deal in Rajya Sabha. The report also includes details of the Capital Acquisitions in the Indian Air Force. As per news agency ANI, the CAG report mentions that compared to the 126 aircraft deal, India managed to save 17.08 per cent money for the India Specific Enhancements in the 36 Rafale contract.

Delhi: Earlier visuals of CAG report being brought to the Parliament. pic.twitter.com/JfDJBBOU7O

The report was tabled on the last day of the Budget session which ends on Wednesday. Before the proceedings of the day began, Congress leaders including party chief Rahul Gandhi, former prime minister Manmohan Singh were seen protesting with paper flags with Rafale written on them.

Rahul alleged that the PM's argument of better pricing and faster delivery of the jets to defend the deal has been "demolished".

Congress had on Tuesday staged a walkout from the Lok Sabha after the government rejected its demand for a Joint Parliamentary Committee (JPC) probe into the Rafale fighter jet deal. Leader of the single largest party in Lok Sabha Mallikarjun Kharge said if Prime Minister Narendra Modi should come forth and constitute a JPC for a detailed inquiry into the deal if the government is not scared of hiding facts. "The Prime Minister does not have the courage. You constitute a JPC, we will prove the misdeeds in the deal," he said.

"The issue has been discussed in detail in the House and the Supreme Court has also put the matter to rest. The Congress has been raking it up every now and then. But the truth will remain. Politics is not done by misleading people. A person should have the guts to speak the truth," Singh said.