Chandrayaan 2 launch date, time and how to watch it live

SRIHARIKOTA: The Indian Space Research Organisation (ISRO) will launch the country's second unmanned Moon mission  - Chandrayaan 2 -  from the Satish Dhawan Space Centre in Sriharikota, Andhra Pradesh at 2.51 AM on 15 July 2019.

The launch of Chandrayaan 2 mission will be live-streamed by the ISRO on its social media handles on Facebook and Twitter. The live streaming of the Chandrayaan-2 launch can also be watched on DD National channel (Doordarshan's YouTube channel, and ISRO's official website - www.isro.gov.in

ISRO also posted the link on its official website for watching the launch of Chandrayaan 2 -  www.isro.gov.in 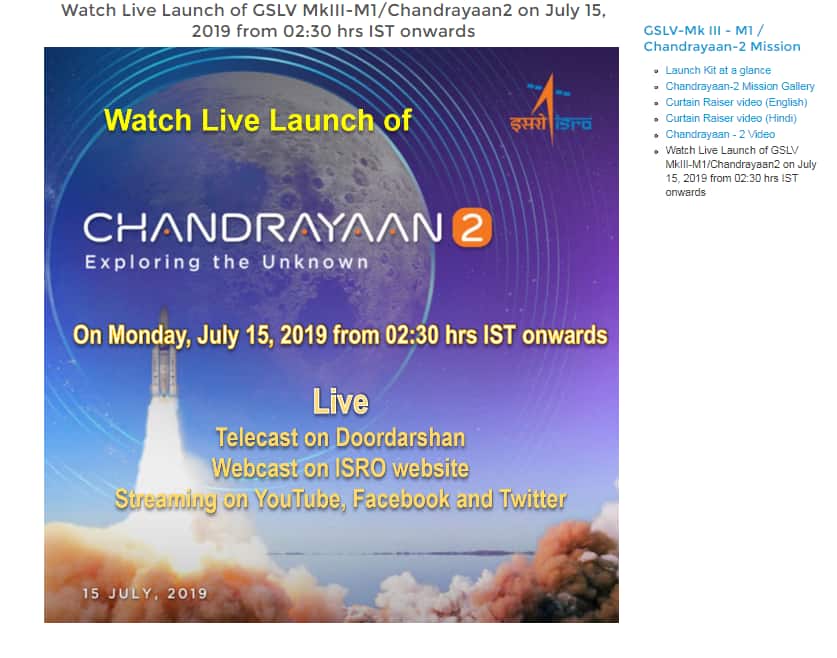 From there, it will be a long journey for the Chandrayaan 2 spacecraft carrying Lander 'Vikram' and Rover 'Pragyaan' will travel further to the moon. The distance between the earth and the moon is about 3.844 lakh km.

On September 6, the Lander Vikram is expected to make a soft landing on the moon and then Pragyaan will roll out to carry out in-situ experiments.

During the countdown, the rocket and spacecraft`s systems will undergo checks and fuel will be filled to power the rocket engines.