Citizenship law is against Constitution: Priyanka Gandhi; UP DCM rubbishes her allegations against Yogi govt

Congress general secretary Priyanka Gandhi Vadra on Monday said that the Uttar Pradesh government and the state police have taken several steps which are not legal and which have led to anarchy in the wake of protests organised against Citizens Amendment Act (CAA). 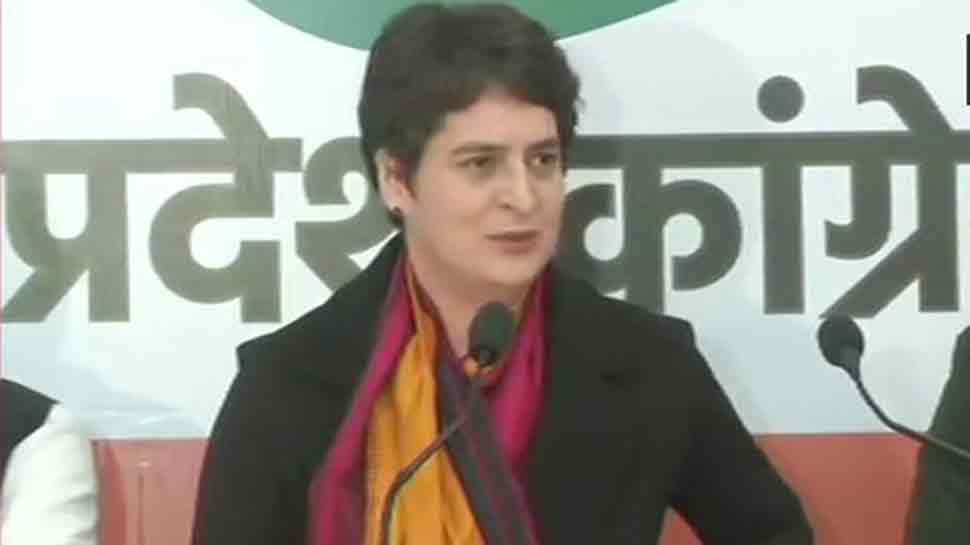 New Delhi: Congress general secretary Priyanka Gandhi Vadra on Monday said that the Uttar Pradesh government and the state police have taken several steps which are not legal and which have led to anarchy in the wake of protests organised against Citizens Amendment Act (CAA).

Addressing reporters here, Priyanka said "The question of my security is not a big question rather a small one. There is no need to discuss it. Today we are raising the issue of security of the state's people."

She said, "We have submitted a letter to the Governor. The letter is a complete documentation of chaos in the state caused by Uttar Pradesh government, administration, and police. They have taken such steps which do not have any legal basis..."

She added "I went to the house in Bijnor where two students died. One of them was shot outside his home ... In the evening, the police threatened them not to take any legal action ... According to media and official reports, 5,500 people were detained and 1,100 were arrested. Unofficially, the number is higher."

The Congress leader also said, "CAA law is against the Constitution. Everyone will raise objections to it. You will ask for documents from the labourers, who are working in cities. How will they furnish the documents of the telephone bill and others from 1970? This law will also torture people like demonetisation. The basis of this law is against the law."

The Congress general secretary said the National Register of Citizens (NRC) will not be implemented as the people won`t allow the exercise to take place.

"NRC has nothing to do with legal citizenship documents. This is just a reason being given to implement the NRC. All Congress chief ministers have said that they will not implement the NRC in their respective states. Some other parties have also made similar announcements. It would not be implemented because the people will not allow it," Gandhi told reporters.

Her remarks came after the Opposition alleged that the National Population Register (NPR) is the first step towards pan-India NRC.

Earlier in the day, a Congress delegation met Uttar Pradesh Governor Anandiben Patel and submitted a memorandum demanding an inquiry into the role of the police during clashes with protesters in the agitation against the Citizenship Amendment Act, 2019 across the state.

UP Deputy Chief Minister Dinesh Sharma later mounted a scathing attack on Congress General Secretary Priyanka Gandhi Vadra, accusing her of supporting rioters. Responding to Priyanka Gandhi`s attack on the state government, he said that she had attempted to malign saffron.

Sharma said that the Congress leader had violated rules to garner publicity, adding "The Congress has been indulging in such unlawful activities since some time. Prohibitory orders were in force and she still created a drama. It is also wrong to say that Chief Minister Yogi Adityanath had used the word `badla` (revenge) in his statement."

He also alleged that the Congress was getting unnerved by the rapid development in the country because it wanted India to retain its image of a land of snake charmers. The government would make all efforts to maintain law and order and no innocent would be targeted, he said, adding "Those who damage public property will have to face action."

He also slammed Priyanka for leveling uncalled for allegations against the Chief Minister and the state government.

Notably, Union Minister Amit Shah has earlier denied any link between the two exercises. On December 22, Prime Minister Narendra Modi had also said that the NRC has not been discussed within the government. The NRC, which aimed at identifying illegal immigrants, was implemented in Assam.

Protests have erupted in several parts of the country after the Citizenship Amendment Act, 2019, was passed in Parliament. The Act seeks to grant Indian citizenship to Hindu, Christian, Sikh, Buddhist and Parsi refugees from Pakistan, Afghanistan, and Bangladesh, who entered India on or before December 31, 2014.