Leaves of doctors and medical officials in the state have been cancelled while hospitals across the state are on the ready.

Odisha is gearing up to face the possible brunt of Cyclone Fani which is expected to make landfall 10km north of Chandrabhaga in Puri district on Friday afternoon.

The entire state machinery is focused towards evacuating people in low-lying areas to safer locations while teams from the National Disaster Relief Force and Odisha Disaster Rapid Action Force are working overtime to ensure that damage to property is minimal and loss of life is avoided.

Leaves of doctors and medical officials in the state have been cancelled while hospitals across the state are on the ready. A list with emergency contact details of hospitals in the state capital of Bhubaneswar was released on Thursday: 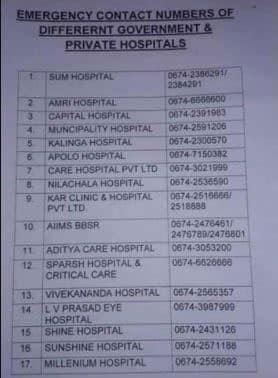 Over seven lakh people are expected to be extradited to safer locations and CM Naveen Patnaik is learnt to have spoken to collectors of Puri, Khurdha, Jagatsinghpur, Kendrapara, Ganjam, Gajapati and Cuttack over the phone, asking them to speed up rescue and relief operations.

Meanwhile, the Indian Navy and Coast Guard have put several aircraft and ships on standby to assist in relief operations. Airport Authority of India has also issued an alert to all coastal airports to ensure all precautions and SOPs are put in place immediately.

At least four trains have been cancelled while another two have been diverted by East Coast Railway.