Puri, in the presence of Delhi Lt. Governor Anil Baijal, handed over the registries, conveyance deeds and authorisation slips to the 20 residents of Suraj Park and Raja Vihar, ahead of the Delhi assembly polls. 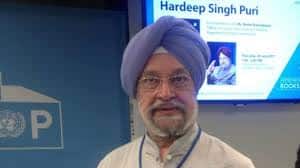 Puri, in the presence of Delhi Lt. Governor Anil Baijal, handed over the registries, conveyance deeds and authorisation slips to the 20 residents of Suraj Park and Raja Vihar, ahead of the Delhi assembly polls.

Reacting to the news, AAP leader and Delhi Deputy Cheif Minister Manish Sisodia claimed that the documents which were given to the residents were "fake". "The BJP is misleading people by giving fake papers to 20 people out of 40 lakh people of unauthorized colonies. What will happen to the remaining people? Will their homes be regularised?," Sisodia asked.

He said the BJP is cheating the 40 lakh people living in the unauthorised colonies. "The BJP leaders, including Prime Minister Narendra Modi, had said that the colonies will be regularised. But they have started giving the conveyance deeds/registries... 20 people were given some paper in the name of convenience deed. These documents were fake. They cannot give the registry without changing the land use pattern," Sisodia claimed.

He said without changing the land use pattern, the MCD will continue to harass the people.

"Until the land use is changed, the people will be harassed by the MCD and the officials. These are just a piece of paper and will not improve the lives of the people," Sisodia said, adding "I want to ask Puri: have you changed the land use? Have you issued any notification? Without making any provision, the BJP has handed over fake documents to 20 people."

"Now you are saying you will not regularise the colonies. How can you give registries in unauthorised colonies? How can there be a registry for home on farmland? Do not do fake registries," Kejriwal tweeted in Hindi.