Delhi CM Arvind Kejriwal attacked the Centre and said that the new farm laws are not only anti-farmer but also anti-people too. 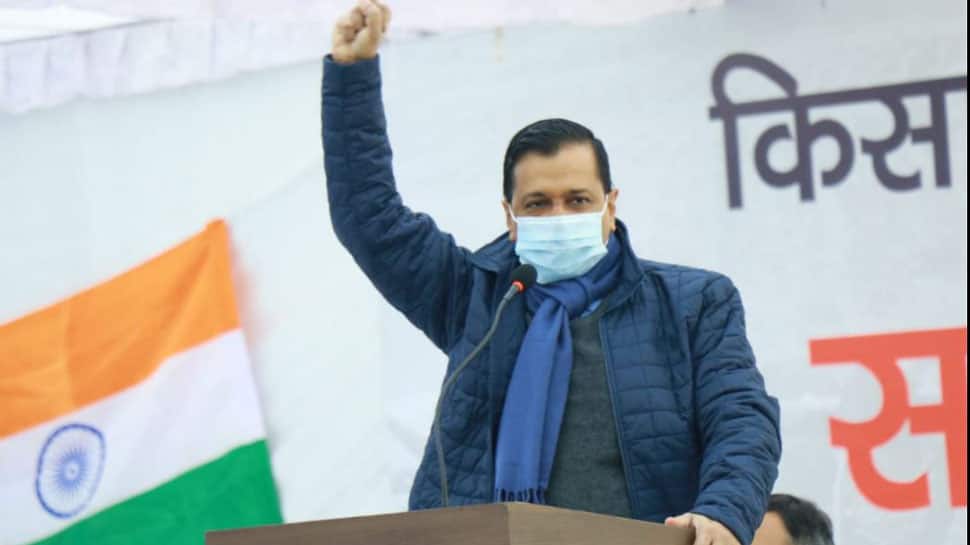 Delhi Chief Minister and Aam Aadmi Party (AAP) national convener Arvind Kejriwal and all AAP volunteers across the country held a day-long hunger strike on Monday (December 14) in support of the farmers protesting against the three farm laws.

Addressing the volunteers at the party headquarters CM Kejriwal said that these farm laws are not only anti-farmer but also anti-people and this will cause a massive price hike as these laws have given a license to do the same and these laws are brought only to benefit some capitalists. He said that these laws say only if prices of farm products double within a year then only the government can launch raids against the hoarders, and despite being a Chief Minister, he cannot raid the hoarders because these laws have tied his hands.

CM Kejriwal said that today, the country is in crisis because the farmers are in crisis. The foundation of any country is farmers and jawans, and the country cannot grow when farmers and jawans are in crisis. He said that when the soldiers sitting on the border hear that their brother and father are being called terrorists, how will they feel? He appealed to those who are calling farmers as terrorists, to stop this dirty politics.

CM Kejriwal said, “I want to thank everyone today who is standing in support of the protesting farmers. I want to thank all those who have joined these farmers in this day-long hunger strike too. Today our country is in a crisis because the farmers are distressed. Farmers and the jawan are the foundations of any nation. When the farmers and jawans are in distress then how the nation can stay well. Today the farmers are protesting in this winter sitting at the streets on the border of Delhi against the anti-farmer laws passed by the BJP ruled central government. I am very happy to see that the whole nation is standing beside these farmers. Doctors, army men, singers, Bollywood celebrities, lawyers and many others are standing beside these farmers. Many people have not been able to reach the Singhu border to show their support for the farmers but from their heart, they are with the farmers.”

“The BJP ruled central government and the BJP got rattled to see our support. Last week when the formers called Bharat bandh then I wanted to visit the farmers and participate in the bandh. But the BJP government blocked the doors of my house and did not allow me to go out. They wanted to make the protest unsuccessful but it did not happen. Today I am standing here in support of the farmers and holding a daylong hunger strike,” he remarked.

Talking about the farmers' protest, the Delhi CM said, “This protest is very holy. These farmers are protesting following the method of nonviolence. They have faced police atrocities but never did any kind of violence. But the BJP leaders are telling them that they are agents of China and Pakistan. They are calling them anti-nationals and terrorists. Sons, brothers and family members of these farmers are fighting in the borders to save our country. The politicians who are saying such things should be ashamed. In these families may be one son has become a farmer and the other one has become a Jawan. The son of the farmer who is fighting at the border of India to protect our country when he gets to know that his brother or father is being called a terrorist then imagine what this person might feel. This is unacceptable. I want to request all these politicians who are trying to defame these farmers to immediately stop these dirty politics."

“These anti-farmer laws are not only devastating for the farmers but also very dangerous for every citizen of India. The price of the day to day items will increase if these laws come into play. These laws have given free license to the price hike. Another way we can say that these laws have given legal shape to the price rise. We know that many businessmen illegally hoard onions and other essential items. This hoarding causes price hike. When the governments get to know about these hoardings then they take action against the hoarding and the situation improves. But these laws say that unlimited hoardings can be done. In every religion hoarding is a sin and it is also illegal. By this law, if the hoarding becomes legalized then the rich people start doing massive hoarding and the price hike will take place. These laws say that is if price rise doubles in one year then only the government can take action against the hoarders. As a Chief Minister if I get to know that some person is hoarding Dal or onions which is why the price of onions or Dal is increasing under this law I cannot take any action against that person. Earlier there was a limit on how much hoarding can be done but now they have removed these caps. All these limits are now gone so the rich people will hoard items for three-four years. If this year the wheat is of Rs 10 per kg then as per the law only if within a year this price doubles then only I can raid and stop the hoarding. If these laws come into play then within four years the price of wheat will increase 16 fold,” he noted.

“These laws will cause massive price hike and running the families will become very difficult. These laws are not only antifarmer but also anti-people. These laws are here just to favour some capitalists. So do not think that you are doing any favour to the farmers by supporting them. These laws are already passed so now if these laws are not rolled back then we all will be in trouble and crisis. Today the farmers are protesting and doing a favour to all of us. The farmers are doing a favour to all the citizens of India. We all need to protest against these laws. The AAP is standing beside farmers and supporting their demands. MSP should be legalized and a law should be brought immediately legalising the MSP. Today we all held a day-long hunger strike in the support of the farmers," concluded CM Kejriwal.