Security at Delhi's Jantar Mantar has been ramped up as scores of farmers are scheduled to hold a massive protest against the three farm laws on Thursday, July 22. 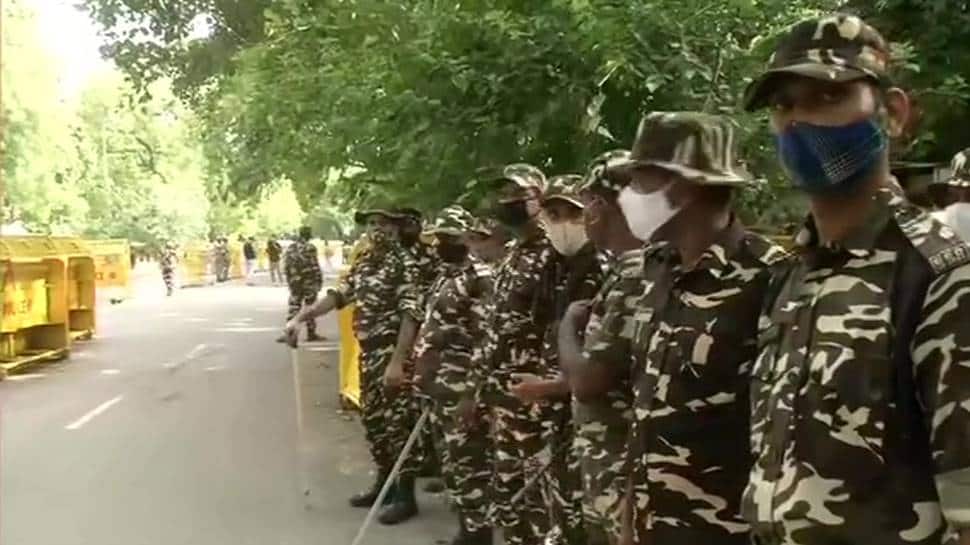 New Delhi: Security at Delhi's Jantar Mantar has been ramped up as scores of farmers are scheduled to hold a massive protest against the three farm laws on Thursday, July 22. Farmers have been permitted to protest with limited numbers not exceeding 200 persons for Samyukt Kisan Morcha (SKM) and six persons for Kisan Mazdoor Sangharsh Committee (KMSC) from 11 am upto 5 pm daily.

Delhi Police says it has not given written permission to the farmers so far, to gather near the Parliament pic.twitter.com/y92vdLqyop

The police said they are not taking any chances after the January 26 Red Fort incident and have made appropriate arrangements.

On Wednesday, the farmers were granted permission by the Delhi government to stage a protest at Jantar Mantar. Though, the the protesters are not allowed to go near the Parliament. “It has not given written permission to the farmers so far to gather near Parliament,” Delhi police said in a statement.

Earlier, the farmers' unions had said they will hold a 'Kisan Parliament' at Jantar Mantar during the Monsoon Session and 200 protesters from the Singhu border will attend it every day from July 22.

The farmers were advised to observe COVID-appropriate behaviour and social distancing. They have also been advised not to take out any march in view of COVID restrictions.

“When police asked us to reduce the number of protesters, we told them to focus on the law and order situation and also gave an assurance that the protest will be peaceful,” said Rashtriya Kisan Mazdoor Mahasangh National President Shiv Kumar Kakka told ANI.

Meanwhile, the Centre said it is open to hold talks over the three contentious farm laws with the farmers who have been agitating on the borders of Delhi for nearly eight months.

Nearly thousands of farmers set camp at Delhi’s Singhu, Tikri and Ghazipur borders in November 2020 with a demand that the Farmers’ Produce Trade and Commerce (Promotion and Facilitation) Act, 2020, Farmers’ (Empowerment and Protection) Agreement on Price Assurance and Farm Services Act, 2020 and the Essential Commodities (Amendment) Act, 2020 be rolled back and a new law made to guarantee minimum support price (MSP) for crops.