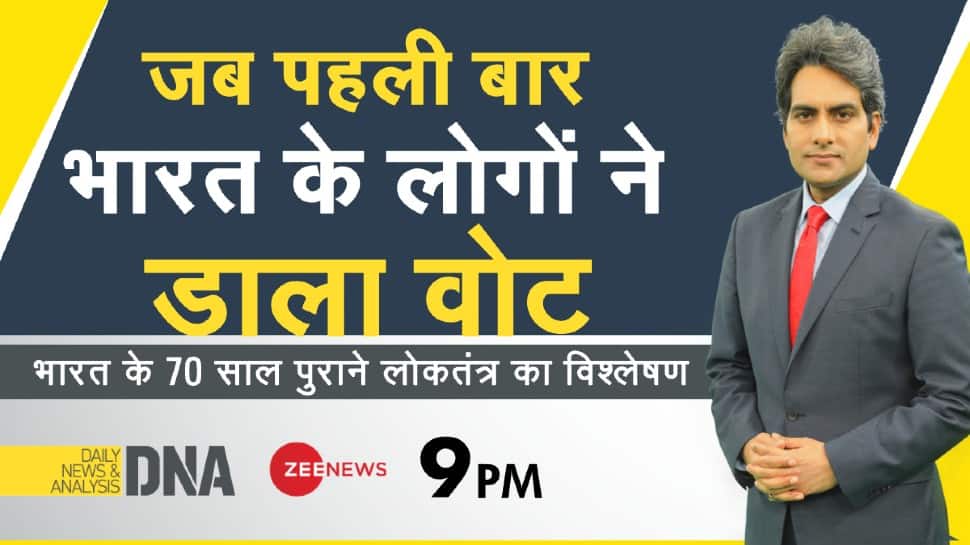 New Delhi: After the constitution of India came into force on 26th January 1950, the biggest challenge before the country was to conduct the first Lok Sabha elections. 70 years ago on 25th October 1951, the first elections were held that lasted for about five months till 21st February 1952. It was a massive challenge for the country, but Indians proved the naysayers wrong.

At that time, out of the total population of 36 crores, there were 17.6 crore people who were 21 years or above and thus eligible to vote. Out of this, 85 percent of the voters were illiterate.

The whole world and especially the western countries doubted India’s ability to conduct the polls owing to the low literacy rate. But the people of India shattered this perception in the next few months.

On 25 October 1951, elections were held for 489 Lok Sabha seats and 3283 Assembly seats in the states. For this, 2 lakh 24 thousand polling booths were set up all over the country. 20 lakh ballot boxes were prepared. For 6 months, 16.5 thousand clerks were recruited, whose job was to prepare the list of voters. Apart from this, 56 thousand officers were put on election duty for whose help 2 lakh 80 thousand volunteers were also recruited. About 2 lakh 24 thousand policemen were engaged to ensure an orderly voting process.

There was no TV at that time. So it was very difficult to make voters aware and tell them how to cast their votes. To solve this problem, the Election Commission produced a film, which was released in about 3000 cinema halls across the country. People could go to the cinema hall and watch this film for free. Apart from this, there were many programmes on All India Radio, in which people were told about the election process. People were also made aware through articles and advertisements in newspapers.

Along with awareness, infrastructure was also needed in rural areas. Therefore, temporary bridges were built in areas near river bodies. The Indian Navy helped transport ballot boxes to coastal areas and thousands of horses were used to cover the mountain areas. A total of about 2.5 crore ballot boxes made of steel were used.

The then Chief Election Officer Sukumar Sen ordered the use of a special type of indelible ink that would be applied on the fingers of the people after voting. This ink used to last for a week so that people could not vote more than once. About four lakh vials of this ink were used in the election.

During the elections which were held in 68 phases, there were 1250 incidents where the model code was violated. These included cases of proxy voting, replacement of ballot boxes and campaigning by politicians around the polling stations.

When the results of the elections came, Jawaharlal Nehru got a thumping majority. Under his leadership, the Congress party managed to win 364 out of 489 seats in the Lok Sabha. The CPI was the second largest party with 16 seats and Socialist Party came third with 12 seats.

Dr Bhim Rao Ambedkar was also fighting against Nehru in these elections. He had formed a party called Scheduled Caste Federation which contested 35 seats in 10 states across the country. But his party won only 2 seats. Surprisingly, Ambedkar himself lost the election from the Bombay Lok Sabha seat.

Bharatiya Jana Sangh also contested 94 Lok Sabha seats under the leadership of Shyama Prasad Mookerjee, out of which it won 3 seats. In the year 1980, this party became BJP.

In a total of about 300 rallies, he addressed around two crore people. He pulled all stops to make the uneducated people believe that he was going to be the PM. After the election, Nehru admitted that his perception of the illiterate Indians had changed. He had this in common with the western countries.

A major issue in the election was the Hindu Code Bill, which was influenced by Muslim appeasement. This bill was introduced in 1951, which sought rights of marriage, property ownership and divorce for Hindu women. Some parties opposed this saying why no such law or bill was being brought for Muslims. Due to the tremendous outrage over this, Nehru had to defer the passage of the bill. This is when Ambedkar, who was the Law Minister, resigned.

The communal polarization due to this issue helped the Congress party. Muslims voted for Congress because they had faith in Nehru that he would not bring such a law for them. And the Hindus voted in the hope that Nehru would not allow the bill to be introduced again in Parliament after it was deferred. However, after the victory in the election, Nehru got this bill passed by the Parliament and no such law was made for Muslims.

Conducting the 1951 elections was undoubtedly a mammoth challenge and though there were many shortcomings, it was a huge success for the Indian democracy.