Zee News Editor-in-Chief Sudhir Chaudhary on Tuesday (December 7) explained why the farmers have continued the stir despite Centre’s proposal to meet their demands. 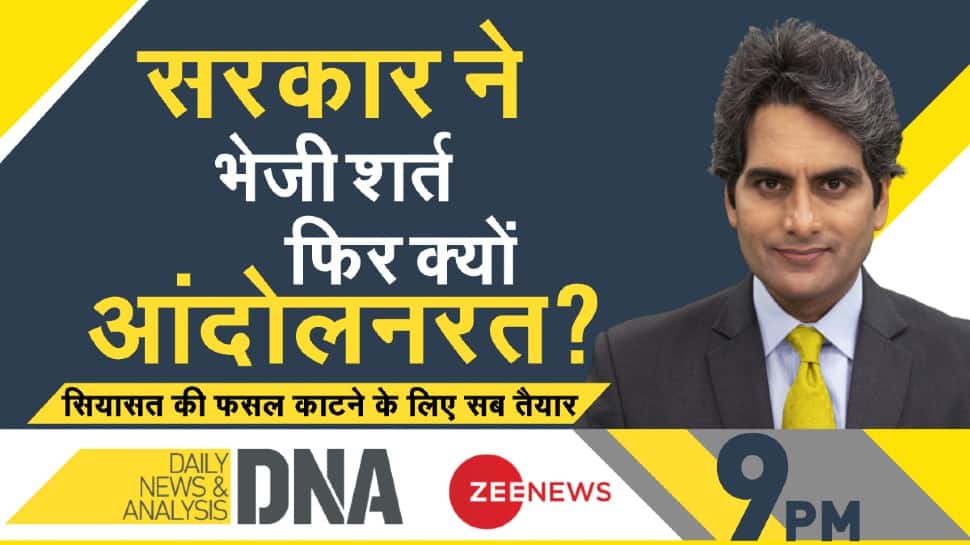 New Delhi: After repealing the three farm laws, the central government has also accepted many other demands of the farmers. However, the farmers have still refused to end the protest. It shows that the agitation is not limited to farm issues, but there’s more to it.

Zee News Editor-in-Chief Sudhir Chaudhary on Tuesday (December 7) explained why the farmers have continued the stir despite the Centre’s proposal to meet their demands.

After the government agreed to most of the demands, the farm leaders have now imposed new conditions. This seems less like a farmers’ movement and more like a political movement.

Here are the key points of the Centre’s proposal to the farmers:

1. The Centre has agreed to form a committee to mull upon a law for Minimum Support Price (MSP) of crops. Representatives of central and state governments, agricultural scientists and farmers' organisations will be included in this committee.

2. The government is ready to withdraw cases against the farmers filed in the last one year during the protests. The governments of Uttar Pradesh and Haryana have given its in-principle approval and said that as soon as the movement ends, all the cases will be withdrawn immediately.

3. The government has accepted the demand for compensation to the farmers killed during the movement. The Centre said that the Punjab government has already announced this. Now the governments of Haryana and Uttar Pradesh have also agreed to this.

4. The government has also changed its stand on the Electricity Amendment Bill. It has assured that before introducing this bill in Parliament, it will consult with all farmers' organisations and people associated with it.

5. On the issue of stubble burning, the government has assured that farmers will be protected from criminal liability, i.e. no case will be registered against the farmers for burning stubble.

The government’s proposal clearly shows that they have agreed to almost all the demands of the farmers.

In response, the Samyukt Kisan Morcha held a long meeting on the Singhu border. It was expected that they will announce the end of the agitation after the meeting. But it did not happen. Instead, they announced fresh demands. They include:

1. Only representatives of Samyukt Kisan Morcha should be included in the committee for MSP law.

2. Criminal cases registered against the farmers should be withdrawn before the end of protests.

3. The family of each of the deceased farmers should get Rs 5 lakh as compensation and a government job.

4. The Electricity Amendment Bill should not be introduced in the Parliament.

5. No action should be taken against the farmers if they burn stubble.

The SKM’s statement clearly shows that they have no intention of ending the agitation and that they are not concerned about the issues of the farmers. It looks like they want to continue to play politics in the name of farm issues.