Zee News Editor-in-Chief Sudhir Chaudhary on Tuesday (November 23) discussed how the farmers are turning their agitation into a global protest against PM Modi. 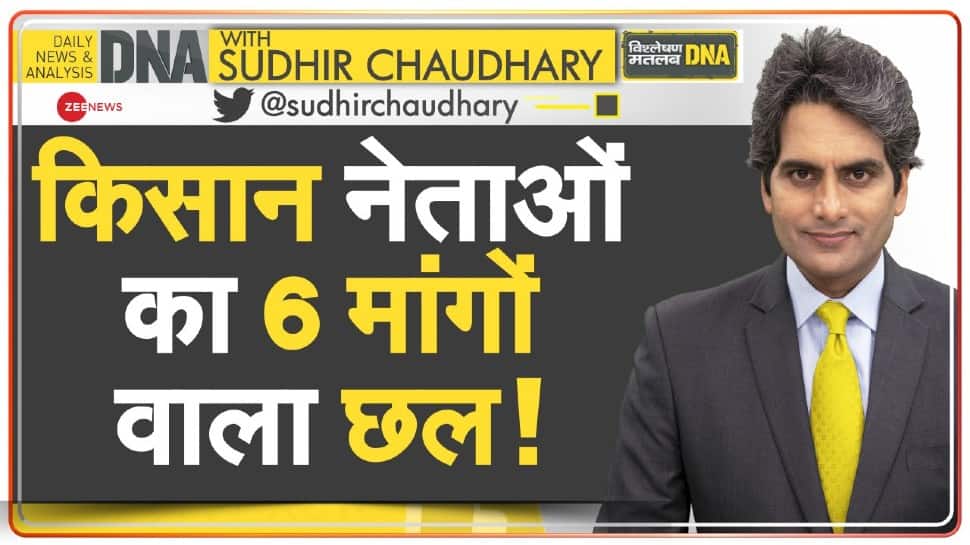 New Delhi: Even after Prime Minister Narendra Modi’s announcement of repeal of farm laws, the protesting farmers, instead of withdrawing the agitation, have chosen to intensify it. They are planning to take the movement global.

Zee News Editor-in-Chief Sudhir Chaudhary on Tuesday (November 23) discussed how the farmers are turning their agitation into a global protest against PM Modi.

PM Modi announced the withdrawal of the farm laws on November 19, 418 days after they were enacted. Over four days have passed since the announcement but the movement has not been withdrawn.

Samyukt Kisan Morcha (SKM) has instead warned to continue the agitation on a larger scale ahead of the Uttar Pradesh assembly elections.

On the occasion of the completion of one year of the farmers' movement on November 26, SKM has said there will be protests not just in India but all over the world including in countries such as Britain, France, Australia, Canada and the US.

The farmers are planning to organise a massive rally in Hyderabad on November 25. Before that, on November 24, they are planning nationwide protests on the birth anniversary of Sir Chhotu Ram, a prominent leader of the Jat community who hailed from Punjab.

The winter session of Parliament is starting from November 29. If the central government introduced a bill in Parliament to repeal farm laws on the very first day, it would take two days for complete withdrawal. That is, by December 1, the three laws will be repealed.

However, the farmers seem in no mood to end the agitation and have put forth six demands before the government. These are:

1. MSP based on the comprehensive cost of production should be made a legal entitlement of all farmers for all agricultural produce so that every farmer of the country can be guaranteed the MSP announced by the government for their entire crop.

3. Removal of penal provisions against farmers in the 'Commission for Air Quality Management in the National Capital Region and Adjoining Areas Act, 2021

4. Sacking and arrest of Union Minister of State for Home Ajay Mishra, whose son is an accused in the Lakhimpur Kheri violence.

5. Withdrawal of all cases filed against thousands of farmers in Delhi, Haryana, Chandigarh, Uttar Pradesh and other states during the protests.

6. Providing compensation and rehabilitation support for the families of the over 700 farmers who died during the agitation. Land should be allotted at the Singhu Border to build a memorial for the deceased farmers.

It remains to be seen how long the agitation will go on.